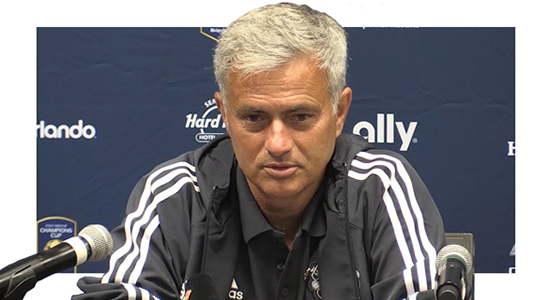 Manchester United closed their pre-season tour of America on a dissonant note by losing this fifth outing in what was a pedestrian showing from José Mourinho’s outfit.

The manager has serially stressed results do not matter and United’s time here is all about fitness and team gelling. Thus, he will return home content with the five matches that have certainly kick-started that process.

Mourinho was however unhappy at his rear guard. “It was an open game, we didn’t defend well,” he said.

“I’m not happy. But in the second half lots of changes for them and for us, but both teams play for the result we tried to equalise, they tried to keep the ball, possession and defend well so in second half the match was positive.”

United are due back in Manchester early on Thursday morning and will touch down with four victories under their belt as attention turns to the UEFA Super Cup meeting with Real Madrid in Macedonia on August 8th.

Mourinho’s side face Vålerenga and Sampdoria in their final warm-ups before the trip to Skopje.

Barcelona Coach, Ernesto Valverde, started with Lionel Messi, Neymar and Luis Suárez up top, Ivan Rakitic and Sergio Busquets in midfield, and Javier Mascherano and Marcelo as part of his defence.

According to Irish times, this was the strongest opposition United faced during their 18 days away. So after those four previous wins the mission to achieve a clean sweep required what would be United’s most impressive victory of the trip.

The challenge began promisingly. Marcus Rashford, operating on the right of United’s 4-2-3-1, hit Romelu Lukaku with a ball that skidded towards the striker as he raced into the area. Lukaku connected but the ball was skied over Jasper Cillessen’s goal.

From here Barca dominated for most of the half though United had their moments. First up was Neymar who followed a dribble by hitting a shot straight at David De Gea. Next, Neymar fed Messi and he did the same – the No1 spilling this time before recovering.