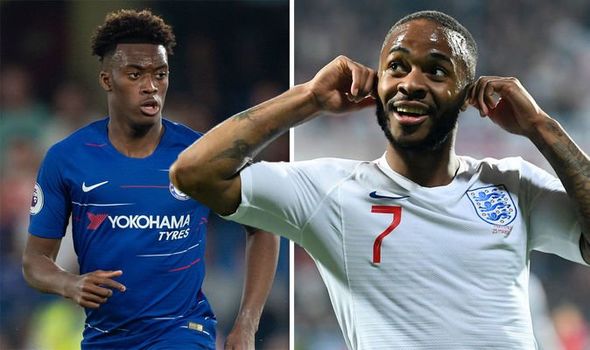 Sterling Is My Idol And England's Leader – Hudson-Odoi

Chelsea forward, Callum Hudson-Odoi has described Manchester City sensation, Raheem Sterling as his football idol and England's leader despite being dropped for the country's European qualifier against Montenegro following a clash with teammate, Joe Gomez.

According to Sky Sports, England manager Gareth Southgate will not select Sterling for Thursday's game at Wembley after the Manchester City star was involved in an altercation with Gomez at the national team's St George's Park training base on Monday - a continuation of hostility which was sparked during Liverpool's 3-1 win over City at Anfield on Sunday.

The report says Chelsea winger Hudson-Odoi, the man who could replace Sterling, does not doubt the City forward's importance to him and the rest of the squad.

"Someone like Raheem is like an idol to me. The position he plays, and what he's doing for club and country, is an amazing thing, which I will try to replicate myself," he said.

"It's an amazing feeling to have someone like him doing what he's doing and being around you every time. I want to keep learning off what he does.

"Raheem's a very nice guy, very encouraging, very positive about everything he does. When I first came in, I didn't expect him to be so nice.

"Of course, he's a nice person but when you see somebody always welcoming you, just talking to you, giving you advice on how he plays and just being around you a lot, it makes you feel so welcome in the team."

Hudson-Odoi also sees Sterling as a leader among his England team-mates, especially due to his continued efforts in the battle against racism in football.

"Definitely. He's very positive about what he does. Whenever he says something, he wants to take a stance and make sure everything is OK with it.

"For someone like him, he's a big leader in the team because he's a very top player, he's in club and country playing every game, working really hard, scoring a lot of goals.

"For someone like that to have a say on racism, it is a big feeling for all of us. He is sticking up for everyone who is involved in the game. It is a great feeling to know he's going to do that."