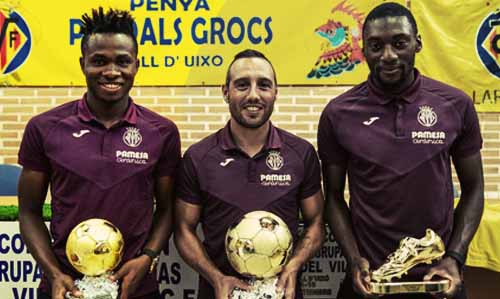 Super Eagles winger Samuel Chukwueze has added another award to His list of growing accolade as he won an award in the Spanish La Liga.

The Super Eagles forward who made his La Liga debut against Levante in November 2018, then went on to score eight goals in 38 appearances across all competitions has been named Villarreal’s best revelation for last season.

The 20-year-old was honoured alongside former Arsenal midfielder Santi Cazorla and fellow African Toko Ekambi in an event organised by the official Villarreal supporters’ group (APV).

The award which is new and christened ‘Peña Pardals Grocs Awards’ was on conferred on the three; This was confirmed on their official website and Twitter page

“Cazorla, Chukwueze and Toko Ekambi, awarded by the yellow rockers

“The rockers have taken advantage of the presentation event to distribute the new ‘Premios Peña Pardals Grocs’, which have recognized Santi Cazorla as the best footballer, Samu Chukwueze as revelation player, and Toko Ekambi as top scorer of the last 2018-19 campaign. The players themselves, attending the event, collected these trophies promoted by the ‘ñ groguets ’of the Vall d’Uixó’.”