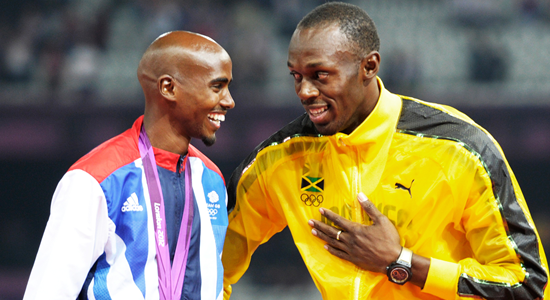 Jamaican sprint superstar Usain Bolt and British distance running icon Mo Farah will end their glittering careers on the track as the world athletics world championships come to London for the first time.

The August 4-13 championships come five years after the athletics world gathered in the Olympic Stadium for the first time as the showcase sport of the 2012 Games.

Bolt won another 100 metre/200m/4x100m treble and Farah got his first of now five straight big-event 5,000m/10,000m on the occasion in front of big and enthusiastic crowds which set a new standard for the sport.

Now the two want to go out in style – with Bolt set to retire while Farah will concentrate on the marathon from next year onwards.

Bolt, who turns 31 shortly after the championships, will only be competing in the 100m and relay. As in the past two years, he is yet to run really fast but has delivered when it mattered for an overall haul of eight Olympic golds and 11 world titles.

“My aim is to win in London. I want to retire on a winning note,” Bolt said last week in Monaco.

“I’ve accomplished all my goals. I’ve brought a different level of excitement and entertainment to the sport.”

Bolt ran a season-best 9.95 seconds in Monaco, still 13-hundredths of a second shy of the season-best from American Christian Coleman but a confidence-booster.

“It was good, I’m going in the right direction, there’s still a lot of work to do,” he said.

Bolt will delight the fans with his usual pre- and post-race antics, and Farah also aims to produce his hands-to-head Mobot gesture two more times in front of a home crowd.

“I cannot wait for the championships. The preparation is going well, I am ticking all the boxes,” Farah said last month after winning a Diamond League 3,000m race in the Olympic Stadium.

Some 2,000 athletes from more than 200 countries will be competing for 48 gold medals, with gender equality reached when the women have a first-ever 50km race walk on the closing day.

While the Russian federation remains banned in connection with doping allegations, a number of Russian athletes including title holders Sergey Shubenkov (110m hurdles) and Mariya Lasitskene (high jump) have been given the green light by ruling body IAAF to compete as neutral athletes.

Athletics’ new Integrity Unit will be responsible for a comprehensive anti-doping test programme in London, which includes 600 blood tests already collected for the biological passports of the athletes and 600 urine samples to be taken to detect substances such as the blood booster EPO and steroids.

IAAF president Sebastian Coe is cautious when it comes to a clean event.

“I would love to tell you that we will have a drug-free sport in future. Everything we are doing is engaged in trying to achieve that but we know a few people will cheat,” Coe recently told the BBC.

Coe, a two-time 800m Olympic champion and 2012 Olympics chief organizer, has named the championships “close to my heart” and expects “an incredible event.”

Many recall the “Super Saturday” from five years ago in which Farah, now retired heptathlete Jessica Ennis-Hill and long jumper Greg Rutherford won three golds for Britain within just over an hour, and interest is huge, with around 1 million applications made for the 700,000 tickets on offer.

Ennis-Hill has retired and Rutherford is injured but the home team hopes to deliver again in a programme where morning sessions with heats have been all but scrapped and only take place on four of the 10 competition days, mainly to accommodate the multi-events heptathlon and decathlon.

Evening sessions have also been tightened in order to make the sport more attractive for a younger audience.

Those who don’t get tickets for the stadium can have a unique experience in the city where the two marathons take place on the first Sunday on 10km loops with start and finish at iconic Tower Bridge; or watch all race walks at The Mall on the final day.