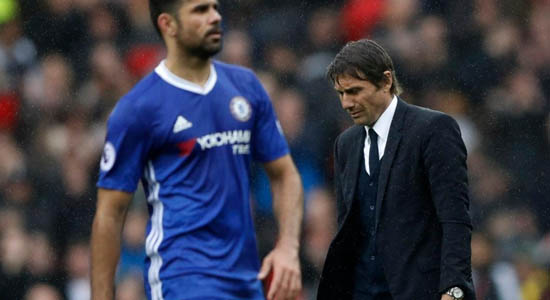 Chelsea have described as “nonsense” claims that Antonio Conte axed Diego Costa by text message this summer after the striker's lawyer threatened legal action over the club’s handling of his departure. Costa’s acrimonious exit from Stamford Bridge escalated this week when his legal representative, Ricardo Cardoso, promised to use “all possible legal mechanisms” to force the player's return to Atletico Madrid.

Cardoso accused Conte of an “inexcusable lack of respect” towards Costa by sending him a text message in June making it clear the 28-year-old was no longer in his first-team plans.

But Chelsea hit back on Friday, declaring Costa was told in January to find a new team next season, having fallen out with Conte by trying to force a mega-money move to China.

“The lawyer’s argument that Antonio, as a coach, has forced the player out by text message in June is just nonsense.”

Conte himself added: “For me it’s very simple, the situation. I repeat what I said in the past, maybe 10 days ago.