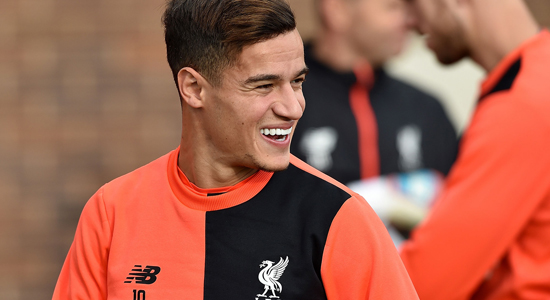 Jürgen Klopp will speak to Philippe Coutinho about the playmaker’s importance to Liverpool and the club’s determination to keep him at Anfield after rejecting an €80m (£72m) bid from Barcelona for the Brazilian.

Klopp insisted Liverpool were not a selling club having dismissed the Spanish side’s approach for Coutinho, although the size of Barcelona’s opening offer demonstrates their intent and they are expected to return with a higher bid. Coutinho is close friends with Barcelona’s forwards Luis Suárez and Neymar – who could swell the Camp Nou coffers by joining Paris Saint-Germain for a world record fee.

Coutinho signed a new five-year contract with Liverpool only last season. His latest deal, worth around £150,000 a week, does not contain a release clause but Liverpool have been braced for a move from Barcelona, who view the player as a long-term replacement for Andrés Iniesta. Klopp regards the 25-year-old as an essential part of his Liverpool plans and will reiterate that in person to Coutinho while in Hong Kong, where the team just lifted the Premier League Asia Trophy.

The Liverpool manager said on Friday: “Yes [Coutinho is not for sale] but that’s not since this morning or yesterday; it’s not been any different. Phil is a very important player for us. He’s trying to get back his rhythm but there’s no doubt about his quality. He’s very smart both offensively and defensively. The nice news for us is that he’s still young. He has improved a lot since I’ve been here and he can still improve a lot.

“I’m not surprised that any club is interested in players at Liverpool. The very important message is that we are not a selling club and that’s how it is. We believe in working together and developing together. We want to make the next step together and for this we need to stay together. We have to create a situation where everybody is easily able to see which direction we want to go. It’s really positive. This is a fantastic club and it’s a good moment for Liverpool.”

Liverpool have sold key talents in recent years – including Suárez to Barcelona in 2014 – but unlike the Uruguay striker, Raheem Sterling or Fernando Torres, Coutinho has not pushed for a transfer and has repeatedly stated he is content at Anfield. He said in May: “Go somewhere else, to Barcelona, to Bayern Munich, to Real Madrid, and you will be just another player. Here you can be something more. I have a long contract with Liverpool.”

Klopp’s stance on Coutinho is similar to RB Leipzig’s position on the Liverpool target Naby Keïta, with the Bundesliga club rejecting a £66m offer from Anfield for the midfielder this week. Liverpool have continued to pursue a deal for the Guinea international despite being informed directly by Leipzig officials that Keïta will not be sold.