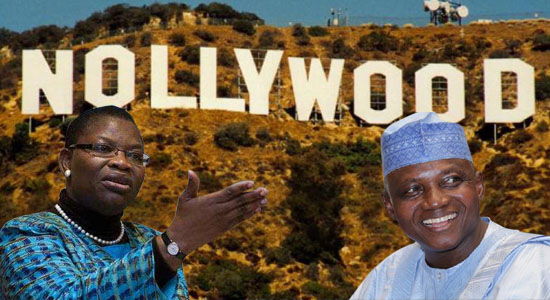 Former Minister of Education and co-founder of Germany-based global corruption watchdog, Transparency International, Oby Ezekwesili, has severely rebuked President Buhari’s senior special assistant on media and publicity, Garba Shehu for an article in which he eulogised the President’s frugality.

In a fierce rebuke, Ezekwesili said “the sort of genuflecting sycophancy that you, (Garba Shehu) have written on President Muhammadu Buhari makes it difficult for you to tell him the truth.”

In the article “A President and His 32″ TV,” which was circulated to media platforms, Shehu Garba cashed in on the wide publicity generated by the picture of Buhari watching the Cameroon-Nigeria world cup qualifier from a modest 32” TV in his Daura hometown.

The media aide wrote that when the President’s personal photographer took the evidently iconic picture, he had inadvertently opened “a window to the world on the facts of life of a man who was singly responsible for the 2015 victory for the All Progressives Congress (APC).”

According to Garba, “a country struggling with its economy should consider herself lucky with a leader who husbands state resources as prudently as he does his personal resources.

“All politicians have their selling points. For President Muhammadu Buhari, it is his simplicity, honesty, incorruptibility and personal integrity. Let the naysayers dispute this!”

But his convictions failed to impress Ezekwesili who in a series of reactions to the article on Twitter, upbraided the controversial media aide for his “comedies.”

“Why not move over to Nollywood and write scripts for their movies? Can't you folks learn that governance is a serious matter?

“Our public officials fail to benchmark what they spend their time on against their contemporaries in say, emerging economies. It's tragic,” the former Minister said.

“When information comes out from the stable of the President of a country, Citizens should want to take it seriously. Stop your comedies please.”

Buhari’s senior special assistant on media and publicity has been in the news for the wrong reasons lately, especially since the President’s return from medical vacation.

He created the viral “rat legend” after claiming that the President would be working from home as his office was damaged by rodents. The remark generated criticisms both within and outside the Nigeria, and for long, became a major troll against the Presidency particularly among social media users.