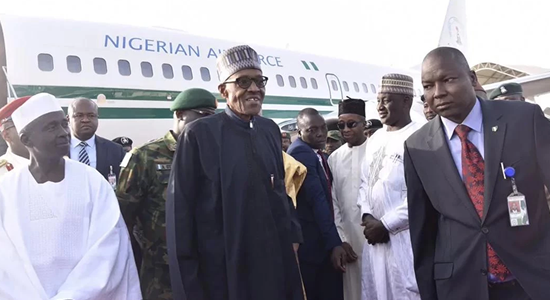 The Presidential Villa Abuja and citizens are excited with the news that President Muhammadu Buhari is finally coming back to the country from London. While the Villa is agog with activities as staff and security personnel are making last minute preparations to receive Buhari and Nigerians have taken to social media to express their excitement.

The News Agency of Nigeria (NAN) reports that Buhari, who has been on medical vacation in the United Kingdom for the past 100 days is expected to arrive the Nnandi Azikiwe International Airport Abuja at 3.00 p.m.

NAN reports that other itinerary members of staff in the Presidency are also on standby, while security vehicles and personnel attached to the President’s convoy had since left for the airport to receive the president.

NAN also observed that members of the Presidential Guards Brigade were seen moving toward the airport after conducting rehearsal at the Arcade in Abuja.


The President, whose absence sparked-off protests both in Nigeria and London with some asking for his resumption or resignation, is expected to make a national broadcast to Nigerians on Aug. 21 at 7a.m.

Buhari left Nigeria on May 7, for the second round of his medical treatment in London after receiving 82 rescued Chibok school girls who were abducted by the Boko Haram sect in 2014.

While in London, Buhari received a number of visitors, including Vice-President, Prof. Yemi Osinbajo, who first hinted Nigerians about the President’s recovery.

The news of his return has triggered a lot of comments in the social media with Nigerians thanking God for sparing the life of Buhari.

The Facebook wall of Adesina has been agog with comments on his posting on the return of Buhari.

Apparently referring to some opposition members who have been wishing deaths for Buhar, Mr. Omokpo Celestine Odior,commented: “ I don’t know how Christians would be wishing another dead or severely ill. Are they not preparing to go to Church tomorrow again now? Such hypocrisy stopped me from going to Church forthwith.

“And is been over a year that I have stopped congregating with unbelievers in Church clothing.’’

Mr. Olayinka Oladosu said: “ Glory be to God for the progress, the Lord that started this will complete it.’’

Yemisi Fadairo said “ To God alone be the glory’’ while Mr. Emeka Chibueze Darlington, said “Baba oyoyo. Our God is good may he grant our father our president the man I love so much safe trip back home. Oh what a mighty God we serve am so happy. Welcome back the Hero of our time.’’

“Glory be to God. Let not the fake protesters for his return gloat that their agitations forced his return. The Lord shall sanitize Aso Villa ahead of his return.

“All images of Dagon in the Villa shall be consumed by fire ahead of your return Mr President. Only the Ark of covenant shall be celebrated in the Villa,’’ Mr. Yomi Idowu, posted.

`Mr. Seni Olagbaju decided to mock some of those high personalities who wished Buhari dead.

“We people of good will should let FFK, Fayose and the likes know about this wonderful development & to inform them that our GOD is greater than their “gods”. Our President is coming back!’’