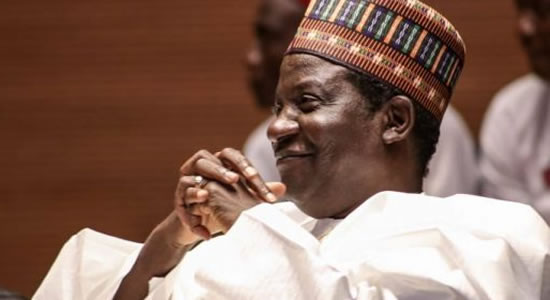 As A Confirm Catholic, Am Ok With Leading Muslim-Muslim Ticket – Lalong

Governor Simon Lalong of Plateau state has disclosed he was yet to receive a directive from Pope to reject the appointment as Director General, DG for a Muslim-Muslim ticket after he was conferred with the responsibility to lead the All Progressive Congress, APC campaign ahead of 2023 general election. The Governor said, “As a Catholic, everything we do, we send the advice to the Pope. The Pope has not told me that what I’m doing is bad to accept the Director-General. As a Catholic, we take that direction,”.

Lalong stated this at the state house Abuja shortly after paying a homage visit to President Buhari at the State House, Abuja, to say thank you to the president for his laudable projects in plateau state, including the presidential pardon given to their former Governor Joshua Dariye.

The governor made such a statement following the agitation that has continued to trail the nomination of former Governor Kashim Shettima as a running mate to, Bola Ahmed Tinibu, come 2023.

Appointment of Governor Lalong being a catholic member as the DG campaign for a Muslim-Muslim of the APC ticket after receiving a backlash from most major Christian bodies in Nigeria, as it did not go down well with some people.

However, Lalong confirmed to newsmen that being an unapologetic catholic member with the highest papal award, “knight of Saint Gregory the Great” he said Pope did not ask him to turn down the appointment being a catholic loyalist.

Lalong disclosed that the Christian Association of Nigeria, CAN, Plateau state chapter has refused to align themselves with some other Christians who are crying foul over a Muslim-Muslim ticket that fielded Aiwaju as APC candidate for the 2023 election.

The statement of the plateau state Governor partly said, “I came back home and CAN welcome me at the airport. The next day, I addressed stakeholders of Plateau State. And I told them why I am accepting. And then there was jubilation and all of them accepted.

“So if you see people talking about me rejecting it…I’ve accepted already. It’s not an option. I’m a Christian. I went through missionary schools. I respect my being a Christian. I have been given the highest award by the Pope. ‘The Knight of St. Gregory the Great.

“And as a Catholic, everything we do, we send the advice to the Pope. The Pope has not told me that what I’m doing is bad to accept the Director-General. As a Catholic, we take that direction,” he said.

The Governor said he was appointed based on politics, not religion, and therefore, chides some Christians who are calling him to reject the offer.

However, when asked about the vacancy in governance he will create while delivering the herculean task, he affirmed that Plateau state was in capable hands.

According to Lalong, “We are using technology now. What is the distance from here (Abuja) to Plateau? It's 20 minutes if you are going by air. Just as I’m leaving this place, I have a Plateau Executive Council meeting. I have capable hands that are taking care of the state. So, I have no fear. That was why I mentioned it, that I have no fear about my time.

He reiterated that “This is not the first assignment I’m doing. I’ve been handling assignments from the Federal Government, from the party while sitting as governor of Plateau State.”