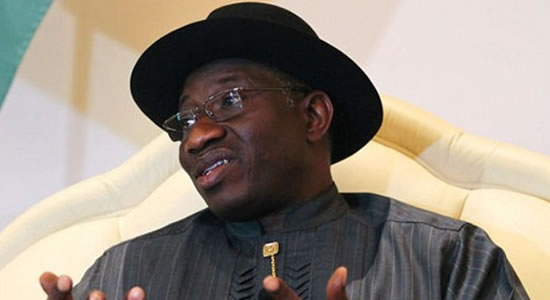 Former President Goodluck Jonathan has joined his voice to those calling for the strengthening of electoral laws so that only ballots shall henceforth determine election winners, not law courts. Jonathan explained that in saner climes and by all standards, the electoral management bodies are responsible for returning candidates and declaring winners, while the judiciary complements these electoral empires either through upholding such declarations or otherwise when is there evidence that the process was marred by malpractices and order for a rerun.

The former president made this statement yesterday while having an interactive session with pressmen from TOSTV Network studio in Abuja.

He sighted that many cases involving electoral contests between parties in Nigeria before now were most cases having winners been decided by courts despite the outcome of such elections.

He quoted how the apex court nullified the election in Imo state where Emeka Ihedioha of the Peoples Democratic Party (PDP) was kicked out in favor of the All Progressive Congress (APC) candidate, Hope Uzodinma.

The court declared Uzodinma as the winner of the March 2019 governorship election, the decision which many politicians are yet to come to terms with.

He noted that most countries that conduct free and fair elections have less litigation concerning election outcomes.

The former Nigeria leader further stated that “I have said this before and I will always repeat it. I am not saying the judiciary is not doing well. But my point is that our laws should suppress the issue of the judiciary returning candidates. If a candidate is declared the winner after a flawed electoral process, what the courts can do is to annul the election and order a fresh one, where a winner will finally emerge through the ballot. The ballot paper should decide who holds any elective office from the councillorship to the presidency. That is democracy.”

Though he admitted that funds might be needed especially in the era of logistics during campaigns, however, slammed the way the fund is later redirected into negative ways like bribing security agencies and electoral officials.

He said though the local government is considered to be the third tier of government, but has been weakening by policy for lack of autonomy.

Jonathan, therefore, call for reform in the local government system to enable them to deliver the dividend of democracy to the grassroots.

The former president lost the election in 2015 to president Buhari who emerged victorious in the process.

He was celebrated for his effort of accepting election outcomes globally even before official results were declared.