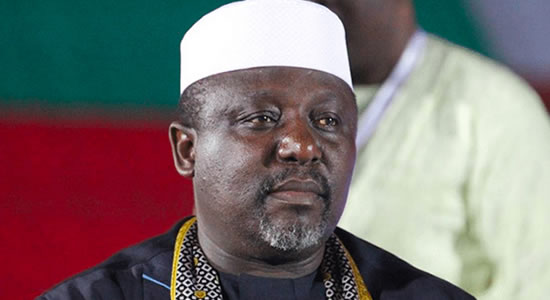 Former Imo State Governor, Rochas Okorocha has scribed the All Progressive Congress (APC) as a party that was hurriedly packaged to hijack power in 2015. Okorocha made these remarks yesterday in Abuja, saying the APC would have been a better party but some people hijacked the party and become lords.

He said the movement for a new Nigeria has just started saying “we must come together, I mean progressive Nigerians, to make the country work,”

Okorocha said, “APC was a hurried arrangement formed to take power when the then government was drifting. APC would have been better until people who were not members of the party, people who came for a congratulatory message, hijacked the party and became lords.”

According to the former governor, the issue in Nigeria is not about the political party but the caliber of those who makes up the entity, that is the politicians, saying Political parties in Nigeria don’t have any ideology – it is just a vehicle to come to power,”

He said what is happening in Nigeria is far from the ideal, he revealed that plenty of people pretend to love the country by are not interested in developing the nation from their hearts. President Muhammadu Buhari could have performed better if he could have surrounded himself with good people.

The lawmaker said if president Buhari would have surrounded himself with good people, the story would have been different.

Okorocha said, “We have bad people in APC, just as we have them in PDP and that was why I made the call in Rivers state that the good ones should come together to lead the people.”

He opined that all the six geopolitical zones in the country should be allowed to produce a president for the common good of the country.

Okorocha was hinted to be mulling cross-carpeting to a new party in a build ahead of the 2023 general election.