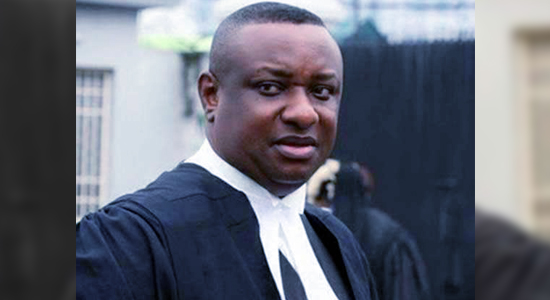 The Ministry of Labour, Employment, and Productivity have yesterday kicked against the resolution of the National Assembly calling for the head of the Junior Minister, Festus Keyamo from supervising the 774,000 Special Public Works Program (SPWP), the federal government is planning to give Nigerians. Mr Charles Akpan, the Ministry Deputy Director Press, made this known in Abuja saying that, “nothing changed.”

The National Assembly had at their separate sessions on Tuesday called on President Buhari to deny the Junior Minister, Keyamo from supervising the recruitment of the SPWP.

Recall Keyamo and the lawmakers had a mild drama when the lawmakers wanted to walk him out of the sitting a committee investigating the SPWP accusing the Minister of raising his voice.

Subsequently, the lawmakers changed direction and accused Keyamo of hijacking the work from the National Directorate of Employment (NDE).

However, against all odds, Keyamo had on July, 14 revealed he has got the approval to forge ahead from Mr President.

The Senate President, Ahmed Lawan and the Speaker of the House, Femi Gbajabiamila meets President Buhari over the same issue.

At the hallowed chamber, the chairman of the committee on judiciary, Human rights and Legal Matters, Opeyemi Bamidele brought the motion through a point of order. He suggested that keyamo has erred through taking over an assignment which by law should have been a work of the NDE through the revised appropriation Act. He said after the National Assembly had approved N52bn for the project, the Labour Ministry has hijacked it.

However, Akpan disclosed that Keyamo is still going to do the supervision as the NDE is directly under his office.

Akpan in his statement said, “The special works programme is with the NDE, but our ministry is the supervising ministry for NDE and because of that, we monitor their activities and the ministry of labour was given the responsibility to handle that assignment, and it is under the supervision of the minister of state. So, whatever the directorate does, it would report to the minister of state; so nothing has changed.”

When asked to react to the Ministry of Labour’s statement, the spokesperson for the Senate, Senator Ajibola Basiru, said the position of the red chamber on the 774,000 job recruitment issue had not changed.

He reiterated that going by virtue of section 82 it recognises the NDE as the Agency responsible for the responsibility of implementing the Federal Works Program. He added, “The Appropriation Act in making provision for N52b for the public works had the NDE in mind. There is a difference between the agency and the Ministry of Labour.

“The NDE is not the same as the ministry of labour, employment and productivity and they are not at par. According to him, what the Senate require is that it was not a mistake when they allocated the fund through the NDE, therefore in carrying out the budget they make sure that no law is breached

“The budget is not just the amount that has been earmarked, it is also earmarked for whom that amount of money should be spent, and also the agency saddled with that responsibility, he said.

“The budget is specific as to the agency in which the budget is domiciled, it is the NDE, and No minister can assume a power that is not vested in terms of expending money that has been appropriated.

“We are insisting that the legality and the constitutionality of the programme must be followed to the letter.