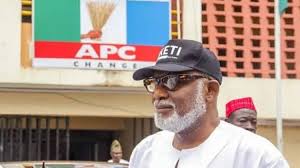 The governor of Ondo State, Oluwarotimi Akeredolu (SAN) has emerged winner of the governorship primary of the All Progressives Congress (APC), with a wide margin. The exercise held on Monday, July 20, at the Ondo state International Cultural and Event Centre, in Akure, the Ondo state capital.

During the 11 hours exercise, Akeredolu got the votes of 2458 delegates, out of the 3127 who voted during the exercise. He emerged winner against 8 other candidates, including Olusola Oke (SAN), who came second with 262 votes, followed by Isaac Kekemeke who garnered 19 votes.

The governor won in all the 18 local government areas in the state.

The primary, which had scores of armed security personnel from the Police, the NSCDC, the DSS, and FRSC, to ensure law and order started exactly 2:00 pm on Monday and came to an end about 1:00 am Tuesday. Accreditation commenced 11:00 am.

The exercise was conducted peacefully with no violent incident recorded throughout.

Following the outcome of the primary, Akeredolu will invariably become the flag-bearer of the party in the October 10, 2020 governorship election.

The chairman of the election committee, Governor Yahaya Bello, while declaring Akeredolu winner of the primary, said a total of 3,016 delegates were accredited for the exercise, while total votes cast stood at 2,793 of the number, 2,760 votes were valid while 33 were declared as invalid.

In his acceptance speech, Akeredolu said he could not have had it better as the victory was handed to him on his birthday.