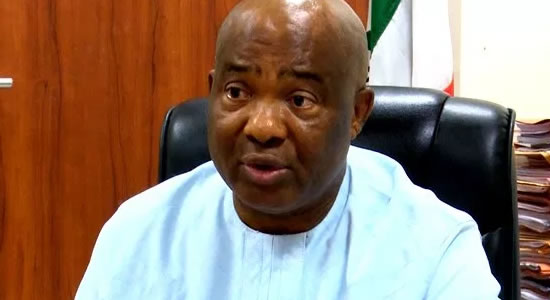 Wike Is Guilty For Oshiomhole’s Travail In APC – Uzodinma

The Imo state governor, Hope Uzodinma has on Wednesday urged his Rivers state counterpart, Governor Nyesom Wike, to always analyse his thoughts before speaking them out especially on political matters, and those concerning the PDP his party he pretends to love so much.

Uzodinma revealed he will say it again if the opportunity presents itself concerning his accusation of the PDP, and personalities like Nyesom Wike who he earlier fingered as persons behind the travails of the National Party Chairman of All Progressive Congress, (APC) Comrade Adams OShiomhole recently in the party.

Uzodinma earlier alleged that Wike and his party were behind the plot to oust Oshiomhole from being the National Party Chairman of the APC.

The statement was disclosed on Wednesday by the Chief Press Secretary/Media Adviser to Governor Uzodinma, Mr Oguwike Nwachukwu.

The statement which partly reads:

“There is no better way to pin Governor Wike down to the recent crisis rocking the APC and its national chairman than the careless way he spoke against Governor Uzodinma who obviously was echoing what many already know about Wike and his type of politics.

“Is it not unfortunate that Governor Wike pretends to have a court injunction on how to speak carelessly, the reason many erstwhile members of the PDP, including founding members, had abandoned the party which is about to collapse on Wike’s head.

“Rather than engage in some kind of introspection on what went wrong with his party, Governor Wike thinks that trivialising serious issues of national and international importance will bring accolades his way.

“If Governor Wike did not have a hand in the Oshiomhole saga, why insult innocent Governor Uzodinma whose only crime was that he brought Wike’s mischief tendencies to the fore for everyone to see?

“Governor Wike pretends to love the judiciary more than anyone else, but the truth is that every opportunity he gets to stand the judiciary on the head he does so with relish.”