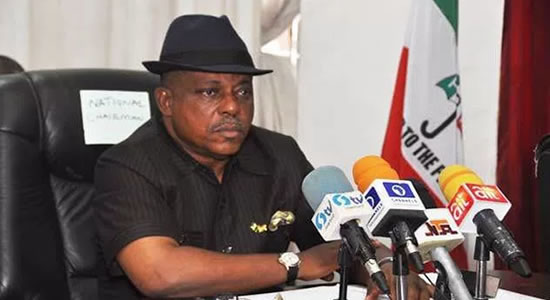 Following the crises that rocked the Peoples Democratic Party (PDP) in Lagos state over emerging of, Mr Deji Doherty as the PDP state Chairman; Prince Uche Secondus, the PDP National Chairman accompanied by other National Working Committee (NWC) members of the party have stormed the Lagos State High Court to explain why they have gone against court order.

Justice Taofikat Oyekan-Abdullai Of the Lagos state High Court had summoned Secondus together with Senator Ben Obi who chaired the congress committee during the purported congress that produced Mr Dehorty to appear before the Justice for court contempt.

Earlier, the court had issued an injunction directing the PDP not to convene the congress but maintain status quo, the Judge said that Mr Secondus and Senator Obi should explain to the court why they should not be sent to prison for refusing to obey court order?

The Court had on 12th November ordered all parties should maintain status quo in relation to the plan under-way by the party to elect new executives, against all odds, the Lagos state PDP still went ahead and conducted the congress.

Justice Onyeka-Abdullahi expressed dismay on how some individuals chose to defile court order out of impunity.

However, Secondus was in court to explain why he went ahead to conduct the congress that produced Mr Doherty.

Meanwhile, the Judge applauded Mr Secondus for appearing before the court which indicated there is hope for headway.