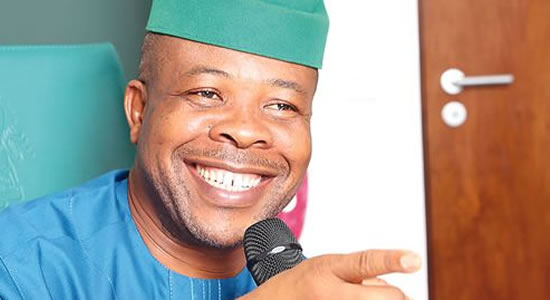 Former Governor of Imo State, Emeka Ihedioha, has reacted to a viral photograph of him crying, shortly after his sack by the Supreme Court.

The photograph, which went viral on social media on Tuesday, showed Ihedioha with his head on his desk crying and sobbing. There were claims that Ihedioha broke down after the apex court’s judgment.

Reacting, the sacked governor explained that the much-talked-about photograph was taken at a funeral of his former Commissioner in December 2019, stressing that he did no display any emotion after his removal by the apex court.

In a statement by his Media Aide, AIC Akwarandu, the former governor said: “The picture circulating online does not in any way represent the mood of the former Governor, Emeka Ihedioha, while the Supreme Court Judgment was announced.

“The pictures was taken on Friday, 20th Of December, 2019, when the then Governor received the body of His departed Commissioner for Environment, late Hon. Tony Okere, at the Council Chambers”.

Vigil360 recalls that the Supreme Court on Tuesday nullified his election while declaring Hope Uzodinma of the All Progressives Congress, APC, winner of the Imo State governorship election.