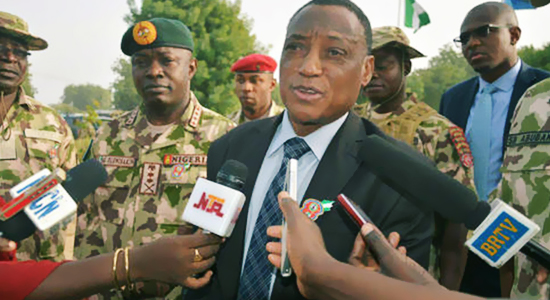 The Minister of Defence, Mansur Dan-Ali

The nation’s military chiefs are to move back to the Maiduguri command centre to consolidate the gains against Boko Haram insurgency. The Minister of Defence, Mansur Dan-Ali, made this known while answering questions from State House correspondents after a closed-door meeting with the Acting President, Prof. Yemi Osinbajo in the Presidential Villa, Abuja, on Thursday.

According to the minister, the meeting agreed to get more surveillance devices, cameras and other vital security gadgets that will be able to see distant attackers coming to the position of the Nigerian troops.

“We just finished a meeting with the Acting President and the three Service Chiefs.

“We agreed that they should move back to the Command Centre again and see what are the things happening there.

“We have also agreed that we should get more surveillance devices, cameras that will be able to see distant attackers coming to the position of our troops.

“The period of the raining season is a difficult moment for us.

“We cannot dominate the environment like what we do during the dry season but effort is geared towards regaining back our areas,’’ he added.

Dan-Ali reassured that “all these ambushes that are happening regularly would be stopped.’’

The News Agency of Nigeria (NAN) reports that suspected members of the Boko Haram sect have intensified their deadly activities in Borno in recent times.

The suspected insurgents on Tuesday attacked a convoy of oil workers at a village along Gubio and Magumeri local government areas.

The attackers ambushed the oil workers, who were staff of the Nigerian National Petroleum Corporation (NNPC), travelling in a convoy of about 10 vehicles.

The oil workers were engaged in oil exploration in the Lake Chad Basin. They were rescued a day after but with the military losing nine men and a civilian.