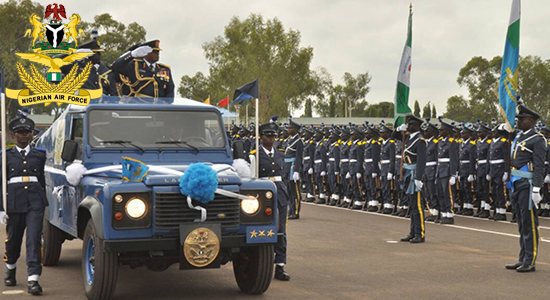 In a statement on Saturday, the NAF reported that the Chief of the Air Staff (CAS), Air Marshal Sadique Abubakar, who was the Reviewing Officer and Guest of Honour during the colourful Passing Out Parade (POP) ceremony, revealed that it was the first time in its history that such a huge number of recruits would be graduating at the same time.

According to him, the feat was made possible by the recent expansion of the training facilities at the MTC to train up to 2,500 recruits at a time as against the initial capacity of 500 recruits. As a result, the NAF had successfully trained, in all, 4,163 recruits for the Nigerian Air Force in just two years, thereby reducing unemployment in the country.

He expressed gratitude to Mr President who, in spite of harsh economic realities, continues to support the NAF to enable it meet its operational requirements and the welfare of its personnel.

Abubakar charged the graduands to take advantage of the knowledge and skill acquired, from the newly introduced Internal Security Module, to safeguard lives and properties wherever and whenever they were deployed for Internal Security duties. In addition, the CAS reminded the new recruits of their civic responsibility.

“You are subject to both military and civil law. Hence, you must submit to civil authority and protect our democracy. I urge you to treat all our people with respect and dignity," he added.

The CAS also presented awards to the best 3 graduands in order of merit namely Recruits Anyim Emmanuel, Awokoya Adeshola and Nwamiri Chiomaobi respectively. Air Marshal Abubakar seized the opportunity to commission a new project and also inspected other ongoing ones.

The POP ceremony was attended by many senior military officers, serving and retired, as well as dignitaries, including the representatives of His Excellency, the Governor of Kaduna State, Mallam Nasir El-Rufai and the Emir of Zazzau, Dr Shehu Idris.

Many of the new recruits from the BMTC 37/2017, who have received special training, would be deployed to the North East to enhance airfield protection and also support fighting land troops.

The NAF recently released the list of another set of over 3,000 successful recruits, who would soon commence the BMTC.