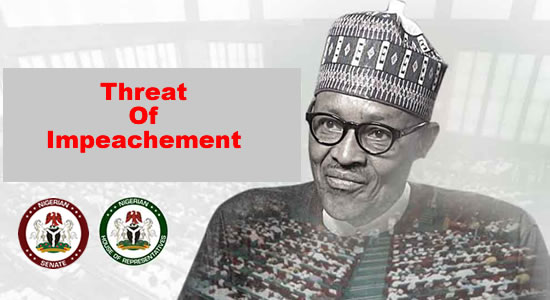 Contrary to the resolution reached by a joint session of the National Assembly on Tuesday, threatening to invoke its constitutional powers against President Muhammadu Buhari, members of National Assembly Parliamentary Support Group, comprising Senators and House of Representatives members in support of the President have issued a statement dissociating themselves from the resolution.

Hon. Abdulmumin Jibrin who made the decision of the group known in a statement released to newsmen in Abuja and also posted on his Twitter handle said the resolution was drafted by members of the opposition party. He claimed that members of the All Progressives Congress were not allowed to make contribution during the session, stressing that the resolution that was drafted by the Senate President's political ally was not subjected to vote according to legislative custom.

"That almost all the members and senators that spoke at the Executive session are of the PDP while members of the APC declined joining the discussion to avoid a rowdy confrontation as the entire session could easily pass for a PDP Executive session.

"That it is commendable that the Speaker tactically refused to make any comment at the session even after the Senate President took time to explain the issues which are mostly personal. That it is disturbing and raised many questions of pre determined intentions that a known ally of the Senate President from Kwara State Hon Rasak Atunwa drafted what was adopted as the resolution and without voting against standard parliamentary practice.

"That most of the issues raised concerning the fight against corruption, insecurity and the rule of law has been severally discussed in the Senate and the House and various resolutions passed. That we commend the efforts of Mr President in the fight against corruption, tackling of the insecurity challenges and respect for rule of law and democratic institutions. Mr President is known for his non interference policy.

"That every Senator or Member of House who has corruption or criminal allegation against him or her should clear his or her name without dragging the entire institution of the National Assembly into the matter. That the National Assembly should as well look inward and address the issue of suffocating Senators and members with dissenting or contrary opinion through coercion or extra legal means.

"That the PDP should recall how it members in the 7th Assembly sat comfortably in the chamber and watched a sitting Speaker, Tambuwal locked out of the National Assembly and all his security personnels withdrawn while APC members had to scale the fence to gain entrance into NASS.

"That we must exercise caution at this delicate period not to overheat the polity with statements that are capable of dividing the country, embarrassing us before the watching world and creating friction between the legislature, Executive and specifically Mr President.

"We wish to reaffirm our support to Mr President as he works assiduously towards dealing with the challenges of our country."