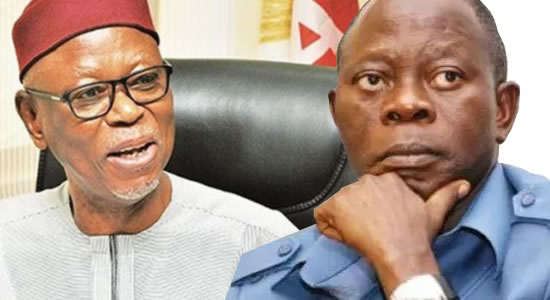 There are indications that President Muhammdu Buhari has dumped the National Chairman of the All Progressives Congress (APC), calling on state governors elected on the platform of the party to support the emergence of former Governor of Edo State, Adams Oshiomole as the party's national chairman in the forthcoming national convention.

It was gathered that the President made the call on Tuesday when he met behind closed door with the APC Governors at the State House, Abuja.

A source in the Presidency said the sole purpose of the meeting was to enlist the support of the governors and fashion out modalities on how to facilitate the election of Oshiomole as chairman at the convention billed to take place in Abuja on May 14, 2018.

Punch had quoted a source as saying “the President called this meeting with the APC governors to ask them to back Oshiomhole’s candidature. That’s the purpose of the meeting; that is the President’s position.”

The development is coming few hours after Oyegun lampooned Oshiomole over his endorsement as the unanimous candidate from the South-South for the position of the national chairman of the party.

“The endorsement is childish, absolutely childish. The voting is done at the convention and not in State houses, not in government houses.

On whether the development bothered him he said "it doesn’t because one of those who want my job is from Edo and he was the immediate past Governor and he was very instrumental in installing the present governor, so I think it is a case of rub my back I rub your back that is playing out.

“They have their reasons for what they did and you have to respect their own reasons, however wrong it is. Don’t bother about this teaser, I will give a comprehensive interview, to speak with you people when the time comes.”