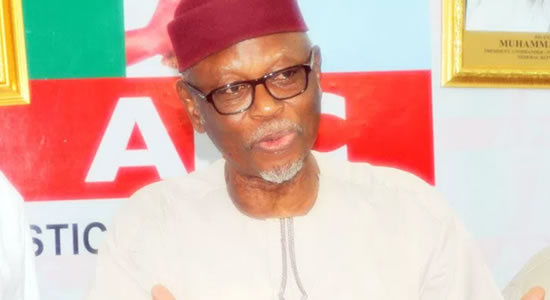 All progressives Congress United Front, an umbrella body for several political groups in the North has endorsed the reelection of the National Chairman of the APC, Chief John Oyegun at the forthcoming National Convention. The forum in a statement issued to newsmen on Monday by its chairman,

Alhaji Ibrahim Musa, commended Oyegun for unifying the ruling party, fostering collaboration and encouraging engagements that neither diminishes others moral worth. The statement urged other party leaders including the former Governor of Lagos state, Bola Tinubu to back his reelection bid.

“A change of leadership is not on the cards. There is no surprise in the air. The dynamic national chairman is sure to win. We need to avoid deadlock. The result of the APC chairmanship election won’t surprise anyone. APC is not a loose coalition of personal and sectional factions.

The incumbent, Chief Oyegun will be reelected for the second time. Party faithful and their leaders in the north are certain of Oyegun’svictory. Oyegun is a stabilizing factor in Nigerian politics. His success in the convention will be based on his performance, popularity and honesty. Other aspirants do not pose serious danger to Oyegun. They have nothing to offer."

“We don’t want a southern gang up against the north. We don’t want to be plunged into darkness. Oyegun, a role model and an icon, is held in reverence and affection by the vast majority of Nigerians. He believes in the course that seeks to prime humanity to loftier heights” the leaders added.

Tinubu who is reportedly having a running battle with Oyegun is rooting for another candidate from the South-South.