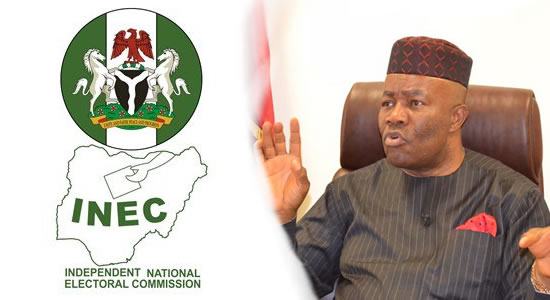 The Independent National Electoral Commission has insisted that former governor of Akwa Ibom State, Godswill Akpabio, remains the candidate of the All Progressives Congress in the senatorial rerun scheduled for January 25. The Commission said the clarification became necessary following moves by the All Progressives Congress, APC to substitute Akpabio with another member of the party, Ekperikpe Ekpo, in the election for the Akwa Ibom North West Senatorial District.

Akpabio had been assigned Minister of Niger Delta Affairs by the President, Muhammadu Buhari. He had since written to his party, withdrawing his candidacy.

INEC National Commissioner and chairman of its Information and Voter Education Committee, Festus Okoye, in an interview with The PUNCH in Abuja said only duly nominated candidates that contested the nullified election are eligible to contest court-ordered rerun.

“The commission has consistently maintained that only duly nominated candidates that contested the nullified election are eligible to contest the court-ordered rerun election. There is no room for withdrawal or substitution at this point.

“The votes of the parties in places not affected by the rerun are warehoused and on hold for integration with the votes that will be harvested during the rerun.

Similarly, a letter by INEC’s Secretary, Mrs Rose Oriraran-Anthony, to the APC also read, “Your letter dated December 10, 2019 wherein you forwarded nomination forms of one Ekperikpe Luke Ekpo as a substitute candidate of your party for the court-ordered rerun refers.

“Please note that the timetable and schedule of activities for the 2019 general elections has November 17, 2018, as the last day for the withdrawal/substitution of candidates for the 2019 National Assembly elections, and the said period has lapsed.

“Further, the said rerun election is to be conducted amongst the same political parties and the candidates who participated in the nullified election.

“Consequent upon the above, the commission cannot accede to your request and Senator Godswill Akpabio remains the candidate of the APC for the Akwa Ibom North-West Senatorial District court-ordered re-run election.”