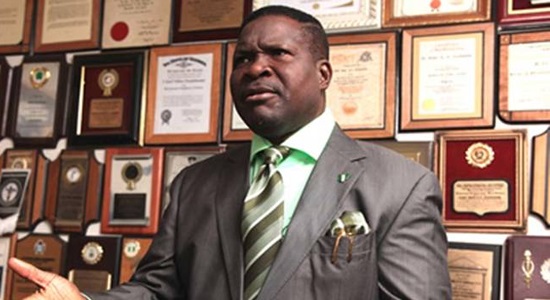 Senior lawyer, Dr. Mike Ozhekome on Tuesday described the hate speech bill which scaled through first reading on Tuesday in the Senate as the most draconian piece of legislation in Nigerian history.

Speaking on the development in Abuja immediately the bill which was sponsored by Senator Sabi Abdullahi representing Niger North Senatorial district was introduced, Mike Ozekhome, a Senior Advocate of Nigeria (SAN), urged Senators to kill the bill during the second reading.

He described the present administration as ‘maverick and intolerant’, stressing that the government should not be trusted with this kind of bill.

“A bill sponsored by the Senate Deputy Chief Whip, Senator Aliyu Sabi, who incidentally was the Spokesperson for the Senate in the 8th National Assembly, is said to have passed the first reading on Tuesday,12th November, 2019.

“Part of the bizarre provisions in the said bill are said to contain prescription of the death penalty for makers of hate speech. What is hate speech by the way and who defines it? What is the true test of determining it? Is the test that of a government in power? Or that of the traumatised people? Or that of the NASS? Or that of the Courts? Or,that of the Executive? Just who?

“I have not yet had the opportunity to read the bill and so do not yet have the details of this unusual bill that has allegedly passed the first reading, seeking the death penalty (by hanging) on alleged hate speech. I pray this provision is not true. I pray it is a mere moonlight tale, the type described as a “tale told by an idiot, full of sound and fury, signifying nothing.”

“This bill should be deleted immediately. The bill should immediately be aborted and killed as a malformed embryo at its second reading gestation stage,before it is allowed to be delivered as a societal monster.

“Let me quickly warn that this maverick and intolerant government cannot be trusted by any sane person to fairly operate such a draconian piece of legislation introduced under a law that carries the death penalty,for alleged hate speech.

“When has merely making a speech under section 39 of the 1999 Constitution, which guarantees freedom of expression become not just treasonable felony (life imprisonment), but treason itself, that is punishable with death?

Article 19 of the Universal Declaration of Human Rights guarantees “freedom to hold opinions without interference and to seek, recieve and impart information and ideas through any media and regardless of frontiers”.

“Nigeria is a signatory to this international instrument. Article 9 of the African Charter on Human and Peoples Rights, also domesticated in Nigeria, reinforces this inalienable freedom that the NASS is attempting to derobe and destroy.

“The bill is an ill-intentioned, ill-conceived, ill-digested and ill-part read dictatorial and absolutist piece of nonsensical legislation waiting to consume all of us.

“An obnoxious law such as this will further drive underground and into hiding, the opposition and genuine social critics who speak truth to power and criticise serial opaque, anti-people, corrupt and high-handed polices of government.

“This government has been tested and known to be very allergic to constructive criticisms. Its skin is very negatively thin against criticisms as regards citizens’ genuine concerns.

“It is a government that listens to itself, sets its own examination questions, marks them by itself and award marks to itself.

“Citizens’ opinion does not matter. That is why we have topmost government officials who shock the conscience of Nigerians and the world by saying, for example, that insecurity in Nigeria”, he concluded.