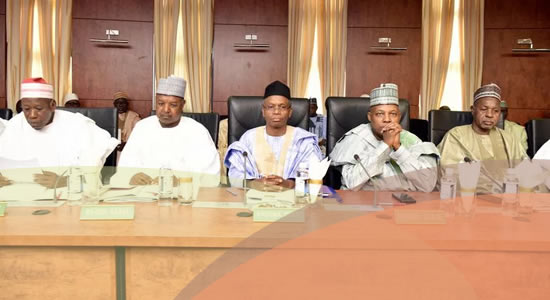 On Thursday, 12th September 2019, the 19 Northern Governors Forum (NGF) held a crucial meeting in Kaduna, the Kaduna state capital. The meeting was necessitated by the growing insecurity bedevilling the region.

According to the Forum's chairman, Barrister Simon Lalong, the Governor of Platea state, it is the forum’s unwavering determination to rescue the region and position it to meet the yearnings and aspirations of the people, especially in the areas of security, economic and social development.

Mr Lalong further informed the press that the Governors discussed issues of common interest, particularly development of the Agricultural sector; being the economic live wire of the region.

He noted that the current challenges of insecurity, which seems to be persisting despite a concerted effort by all tiers of Government, was also deliberated upon.

Lalong was quoted saying "At this meeting, we shall deliberate on the National Livestock Transformation Plan (NLTP), which was commissioned by the National Economic Council chaired by Vice President Yemi Osinbajo (SAN) and seeks to support and strengthen the development of market-driven ranches in the livestock ecosystem for improved productivity through breed improvement, pasture production, efficient land and water utilisation".

Mr Lalong added that the forum noted the National Livestock Transformation Programme was meant to provide a mechanism for peaceful dialogue and reconciliation in crisis communities toward a harmonious and mutually beneficial region.

Disclosing the resolutions adopted by the NGF, Lalong informed the adoption of the National Livestock Transformation Plan (NLTP) which includes modernising pastoral activities, while encouraging states not included in the pilot scheme to endeavour to join.

The Forum encourages Governors in other parts of the country to follow suit.