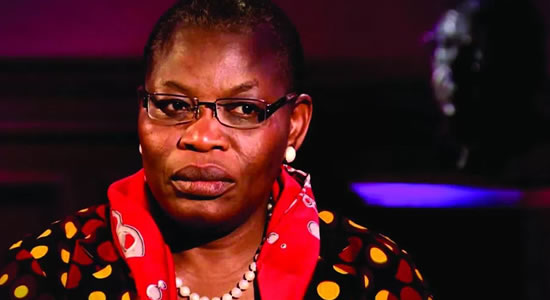 Ezekwesili Confirms Rejecting Offer To Serve As VP To Buhari

Former Minister of Education, Oby Ezekwesili, has confirmed that she actually rejected the offer of becoming a running mate to President Buhari in the 2011 general election. Buhari contested for the number one seat during 2003, 2007, 2011, and finally 2015 before he made it to the statehouse when he defeated the incumbent President, Goodluck Jonathan.

Pastor Tunde Bakare of the Citadel Global Community church had earlier this week revealed that the current Vice President, Prof. Yemi Osinbajo, Oby Ezekwesili, Jimi Agbaje, and the current Minister for Trade and Industry, Niyi Adebayo were amongst the people contacted to serve as running mate to President Buhari.

Meanwhile, when Ezekwesili was approached to clear the air on the claim, she said, she did not “Waste a moment in saying no” to the offer though she did not mention her reason.

The statement goes as: Please tell us, is it true you actually rejected the offer to be Vice Presidential Candidate to Buhari as Pastor Bakare @T_Bakare said?

In her reply she said, Yes it is true. Any more questions? “I laughed at the many messages people sent me upon reading @T_Bakare ‘s factual statement that I rejected running as VP with @MBuhari in 2011. “I did not waste a moment in saying No.

“It is why I have always pitied those who spend their years lying against me,” she tweeted on Tuesday.