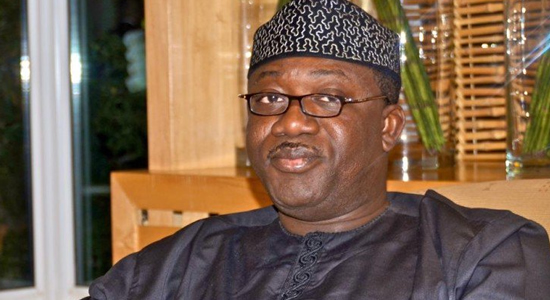 The crisis rocking the All Progressives Congress (APC) in Ekiti state just took another nasty turn on Friday, as a faction of the party spearheaded by Senator Tony Adeniyi suspended governor Kayode Fayemi over alleged anti-party activities. In a statement release on Friday, a sec meeting was held on Tuesday, September, 23, 2020, which resulted in the suspension of Fayemi, in accordance with Section 12.8 of APC Constitution. The APC accuse Fayemi of anti-party roles in the Sept. 19 governorship election, which saw the party losing out in the contest. The party also said Fayemi has colluded with Governor Nyesom Wike of Rivers State in his bid for 2023 vice president candidate under the PDP, if his bid for presidential candidate in APC fails. According to the statement For five days prior to the Edo elections, Gov Fayemi hosted PDP big wig Mr. Femi Fani-Kayode in the governmnet house in Ado Ekiti in the run-up to the Edo elections. It was here they perfected the coup against the party in Edo state.

"This is the same Fani-Kayode who daily abuses President Muhammadu Buhari, Vice President Yemi Osinbajo, the APC as a party as well a vital section of our country. We have evidence of that meeting."

The statement read in part, "(a) We also have evidence of celebration by his aides in the Ekiti government house and on social media.

"(b) We also recall his role in the gubernatorial election in Oyo state where he supported the PDP candidate to defeat the APC candidate. A second tranche of money he sent to Gov Makinde in the election was intercepted by soldiers. The courier Mr Ayo Adegbite, his Chief Protocol Officer was arrested and he immediately disowned and announced his sack. Mr. Adegbite remains his aide till date.

"(c) We also recall the support he provided a PDP candidate an APC Senator Prince Dayo Adeyeye in the Tribunal. He moved the judges to Kadunato deliver judgement when he knew what he planned against his party was unpopular in Ekiti. We have more to tell on this betrayal and traitorous act of his. APC Senator is out of the Senate today and PDP is in. The relationship between Fayemi and Senator Olujimi of PDP, the beneficiary of his treachery is known to all in Ekiti State.

"We also recall his resort to court when the majority of party members nominated late Senator Abiola Ajimobi for Deputy National Chairman of the party. He fought Ajimobi till death.

"That the Paul Omotosho and his co-travelers' refusal to respect court proceedings in which they are not only joined but appeared in court through the defiantly disrespected the court contrary to the hallowed decision of the Supreme Court in OJUKWU vs GOVERNOR OF LAGOS STATE.

"That Paul Omotosho faction of the executive should desist from parading themselves as the Executive Members of the Party in the State and that the Nigerian Police and Independent National Electoral Commission (INEC) and the general public should take note."