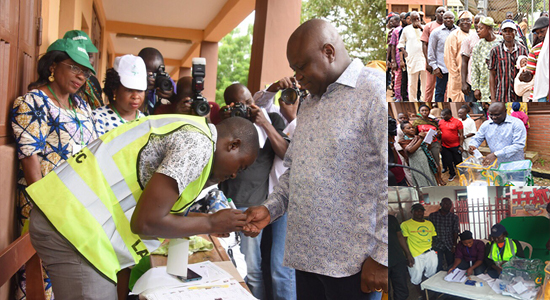 Lagos residents commenced voting, today, July 22, to elect their chairpersons and councillors across the 20 local government areas and 37 local council development areas of the State.

The ruling party APC and the PDP being the two major parties prepared grounds for the race in the State thereby opening window for the other contenders to give a shot at winning the race. Accreditation of eligible voters and voting commenced simultaneously as early as 7.00 a.m and is expected to run till 3.00 p.m.

Irrespective of heavy down pour experienced in the State, Governor Akinwunmi Ambode lead scores of electorates to the venue to cast their votes about 9:31 a.m.

The governor, who was among 458 accredited voters at Ward A6 unit 33, Ogunmodede College, Papa, Epe Local Government was the 12th person to cast his vote. Concerned by the low turnout of voters which was attributed to the heavy downpour, the governor urged residents to defy the rain and perform their civic responsibilities.

In another development, the Special Anti-Robbery Squad of the Lagos State Police Command arrested five persons with incriminating materials in Ikeja, as the local government polls got underway.

ASP Olarinde Famous-Cole, the spokesman of the command, who confirmed the development, disclosed that the suspects, who claimed to be agents of a political party, were arrested with incriminating materials at 8.30a.m.

“The suspects have been handed over to the Area F Command, which will send them to the special team for election crimes at the state Criminal Investigation Department for further investigations.”

Meanwhile, the military, police, Security and Civil Defence Corps and Immigration, have deployed their personnel to strategic locations in different parts of the State to ensure peaceful elections.