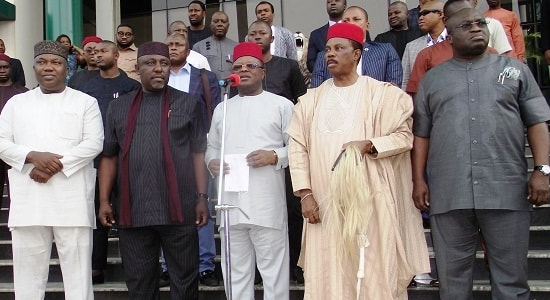 The Governor of Ebonyi State and Chairman of South East Governors’ Forum, David Umahi, has raised the alarm on plots to incite war in the South East. He urged the people not to fall for such plans. He spoke on Channels programme Sunrise Daily breakfast show, yesterday. The governor while reacting to the rising insecurity in the Southeast, where gunmen have attacked several police stations and killer-herders have sacked communities, especially in Ebonyi, said bandits were committing crime in the Southeast under the guise of the Eastern Security Network (ESN), a security arm set up by the proscribed Indigenous People of Biafra (IPOB). He emphasized that governors would not allow what he termed illegality to reign in the region, which was why they launched the Ebube Agu vigilante outfit. The governor claimed there was a plot to incite war in the Southeast, asking the people not to fall for such plans.

According to the governor, farmer-herder clashes are not the only threat facing the region.

The governor vowed that leaders of the region would not allow criminals to have a field day in the area.

“Of late, we have bandits that are now doing a lot of evil and saying that they are of the Eastern Security Network (ESN).

He noted that the establishment of Ebube Agu will tackle insecurity in Igboland.

“We have the command of the law to protect the lives of our people and we would not allow illegality to thrive in our land. Conflict will not resolve conflict,”

“But what some of these people are doing is to incite the Southeast into war and step aside, and we are not going to buy into that; we’re not going to be deceived again,” Umahi said.

While reacting to a question of whether Ebebe Agu was being communicated to the people so that they can take ownership of it, the governor said: “Whether it inspires confidence or not, it does not matter to me.

“What matters to me is that our people will be satisfied with our efforts in protecting their lives and property.

“People must be very careful, and know that there are grand plans by people who have no interest in the Southeast to incite them into war and we are wiser than that.”