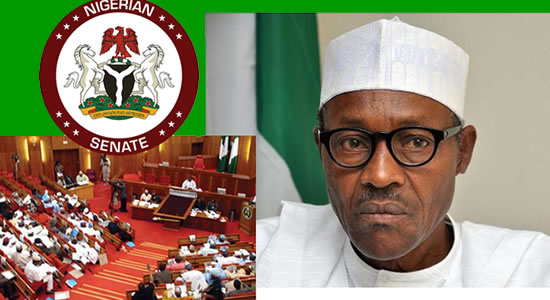 The Senate has today applauded President Buhari for his directive to the military to launch an onslaught against bandits in Kastina state.

The commendation comes as opposing the condition of a motion being examined on the floor of the Senate on the need to include adjoining states of Kaduna, Zamfara, Kebbi, Niger and Sokoto.

The lawmaker while presenting his motion recalled that the red chamber had last week Tuesday, May 12, considered two separate motions on the need for the Federal Government to immediately proffer a lasting solution to the growing insecurity of banditry in Niger and Kastina state.

Senator Abdullahi said the house was, “aware through a Presidential Spokesman that President Muhammadu Buhari has authorized the commencement of a major military operation to sweep bandits and kidnappers out of Katsina state; as major proactive measures by Special Forces to replace the reactive strikes against the camps of these bandits and criminals.”

According to the Senator, the activities of the criminals are being perpetrated mostly under the cover of the contagious forest reserve and other catchment area stretching beyond like Zamfara, Kaduna and Niger state with a pocket of safe havens in Kebbi and Sokoto states.

Abdullahi expressed worry that “a Major offensive in Kastina state alone would push the bandits to find refuge in neighbouring states like Zamfara, Kaduna and Niger states which also share the Zurmi and Kamuku forest among others, saying this would amount to compounding the plight of the helpless rural dwellers that would be found in neighbouring communities.”

He pointed out that “it was the earlier massive operations in Zamfara and Kaduna states that led the armed bandits to seek refuge elsewhere, stressing this moving into Kastina and Niger state respectively and some other part would make them push their frontiers to some part of Sokoto and Kebbi state.

Meanwhile, the red chamber in a unanimous decision appealed to President Buhari to expand the coverage area of the operation to include Zamfara, Kaduna, Niger and Sokoto states with some others where possible where it is envisaged the criminal elements would seek a safe haven to hibernate when the operation come into force.

The Senate also called on the military formations and the Nigerian police to step up their game to track the movement of these armed bandits in order to forestall them from accessing any enclave that would give them cover.