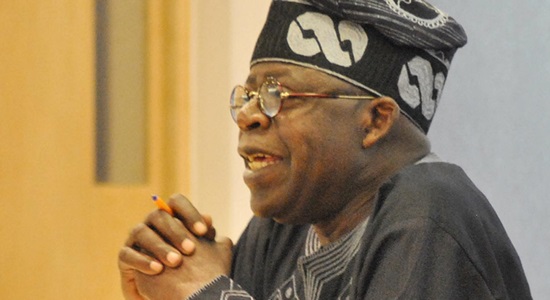 The National Leader of the All Progressive Congress (APC), Chief Bola Tinubu has called on residents of Lagos state and Nigeria at large to comply on government directives and measures put in place for the safety of the general public against the COVID-19 virus.

Tinibu was speaking while addressing newsmen at his Lagos resident, Marina after meeting with the Lagos state governor, Babajide Sanwo-Olu alongside with some APC stalwarts.

The former Governor of Lagos state said he was in support of any measures adopted by the government including total lockdown where possible to arrest the emergency situation.

He commended the Lagos state governor for his directive of ‘stay-at-home” order for civil servants so as to minimised social contact against the dreaded virus.

Tinubu commended the Lagos state government and the APC party at large with the manner the governor was approaching and handling the situation urging that the party was in full support of the governor’s effort.

In his statement; “We need to observe social distancing.

It is a new culture that we have to abide with.

You must respect the governor’s directive for the workers to stay at home, particularly our students and market women.

“We must obey the government. We thank religious leaders who have asked their followers to follow the governor’s directives, both Muslims and Christians alike,” Tinubu said.

The APC leader called on market women to abide by the strict hygiene procedures to stay healthy as directed by the government.

Tinubu further explained to the gathering that;

“The activities in the market must reflect the new culture.

It will teach us a new thing that we are not used to such as hygiene, washing of hands, not having handshakes and eliminating hugging.

“We are to prevent the spread of this mysterious disease.

In bus stops or various environments, we must maintain distance, stop handshake and do what is necessary so we can save lives.

We don’t have enough hospital spaces.

“It is not only by prayer, it is by us observing what is necessary to stop the disease that is ravaging the world.

My appeal is for people to respect the information coming from the government house.

We endorse the position of the governor.

“Stay at home, pray in your house, and observe hygiene.

To the market women too, it is very important.

“If the government decides there is a need for total lockdown, I am in support of it.

He has our support. We have reviewed it with him and he is also reviewing it with his cabinet,” Tinubu said. (Vanguard)