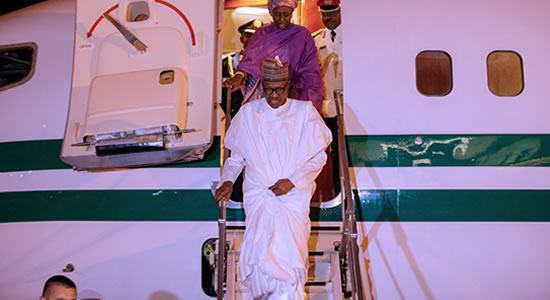 End Banditry And Return To Your Families - PMB Direct Military

On 17th August 2019, President Muhammadu Buhari ordered the Military serving in North-Western Nigeria to pursue armed bandits terrorizing the geopolitical zone and eliminate them. The President gave the order while addressing 15 officers and 160 soldiers of the 17th Army Brigade and Nigerian Air Force 213 Operational Base in Katsina, under the “Operation Hadarin Daji’’, at the Umaru Musa Yar’adua airport, Katsina.

He gave the order while on his way to Abuja, after the Sallah break.

The President also instructed the Military to be more committed to restoring peace to the country, particularly states troubled by bandits, ordering them “not to spare any bandits’’ who have been killing, maiming and extorting innocent citizens.

In his words, the President was heard saying “As the Commander-in-Chief of the Armed Forces, I believe you are capable of doing it.

I don’t think you should spare any bandit.

The rainy season is good and we are already achieving food security, but we need peace.

The money saved from food importation will be used to purchase arms for operations,’’ he added.

The occasion which had the President was also flanked by Governor Aminu Bello Masari, who assured the troops that the Federal Government will provide all the necessary support for the restoration of peace in the country.

He met the victims in Batsari Local Government Headquarters. President Buhari, also during his stay commissioned three road projects constructed by the Katsina State government and the Nigerian Air Force Reference Hospital both in Daura and its province.