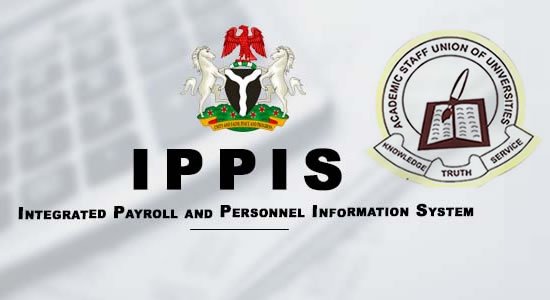 The Federal Government and the Academic Staff Union of the Nigerian Universities (ASUU) has failed to agree on the ground that ASUU has continued to resist enrolment halfway into the implementation of the Integrated Payroll and Personnel Information system (IPPIS). President Buhari has yesterday received the ASUU officials lead by its president, Prof. Biodun Ogunyemi at the State House Abuja.

At the meeting were; Boss Mustapha, the Secretary to the Government of the Federation who insisted that ASUU must continue with the enrolment into the IPPIS in the national interest, saying his office has already commenced the process of streamlining issues concerning human resources in the government.

However, ASUU president insisted that the IPPIS program has gone against the law of both the federation and the university statutes and have also violets the former agreement between the university and the Federal Government.

Ogunyemi explained that the IPPIS will be a disruption into their system where he pleaded the government to give them a chance of lunching their innovation of “a robust system of human resource management and compensation, called the University Transparency and Accountability Solution, which will address peculiarities of universities and end inappropriate recruitments.”

But the Minister of Finance, Budget and National Planning, Zainab Ahmed insisted that the program has been set and action already in progress, saying the ASUU should just complete their enrolment instead of the futile effort of trying to evade a national program.

She urged the ASUU to encourage their remaining members who are yet to be enrolled into the system to fasten effort and approach the enrolment officers as a desk has been created in the office of the Accountant General to take care of that.

She disclosed out of the 137,016 academic and non-academic staff members of the Universities, out of which 96,090 has already been enrolled on the IPPIS.

The Minister further stated that many anomalies were discovered in the university structures that had contributed to the increased cost burden, including staff working and earning pay in more than one university, contract staff on the payroll of the government, tax reductions on PAYEE and multiple employments.

Some universities rushed and employed more staff when they discovered that the IPPIS is inevitable and that was detected the Mister added.

Meanwhile, President Buhari while speaking through his special adviser on media, Femi Adesina said, the federal government will give more priority to improving personnel and infrastructure of universities to help them produce a more refined graduate.

The president said effective and efficient operations of universities would go a long way in improving the economy, especially with a focus on science and technology.