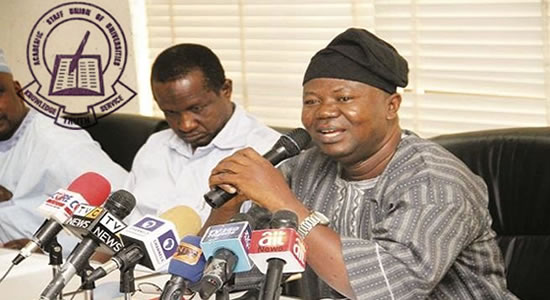 The Academic Staff Union of Universities (ASUU) said on Wednesday there is no going back on its rejection of the Federal Government’s Integrated Payroll and Personnel Information System (IPPIS). The National President of ASUU, Prof. Biodun Ogunyemi, said in Lagos that there is nowhere in the world where such a development is obtained.

The federal government had directed that public sector workers, including universities, must be captured on the IPPIS to save cost and fight corruption by blocking leakages in its salary payment structure. The move had since been resisted by the university lecturers.

In his statement which partly reads: “ASUU has not changed its position and ASUU believes that whoever chooses to go for the IPPIS should also remember that a time will come when they will regret it. “Our stand against it is not for selfish reasons but we expect that things must be done right at all times.

“IPPIS is an aberration, it does not apply to universities because there is no university anywhere in the world where IPPIS is applied.

“Even in Ghana where they have something similar to the IPPIS, they went ahead to exclude the universities and that is why we are saying our own cannot be different.” According to him, the world over, people keep advocating for internalisation so as to bring in experts from around the globe to work in a system, whether on a long or short term basis and such persons are normally subjected to the rules of the civil service.

He insisted that IPPIS is designed for civil servants and not for the universities, noting that universities should be governed according to their laws. (NAN)