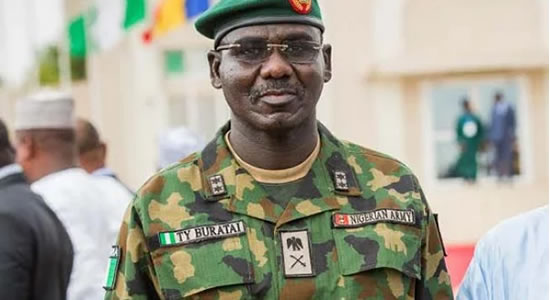 The Nigerian Army said it has concluded investigation into the killing of policemen in Ibi, Taraba State and has vowed to take decisive action against its personnel involved in the incident.

The disclosure was made by the Chief of Army Staff (COAS) Liutenant General Tukur Buratai during the opening ceremony of the chief of army Staff combined second and third quarters conference in Abuja.

Buratai said the incident calls for better inter-agency collaboration among the security agencies in the country particularly among those at the junior level.

He said “It is imperative to be more proactive in ensuring discipline and professionalism of our personnel in dealing with agencies of government and indeed the larger society. We should also note that the Nigerian army as part of the Armed Forces of Nigeria is mandated to support the civil authority and the Nigerian Police Force in internal security operations.”

Buratai also said the army has redefined Operation Lafiya Dole with the Super Camp concept to end terrorism in the Northeast.

The Super Camp entails the concentration of fighting forces in strongholds that have the capacity to respond swiftly to threats, he added.