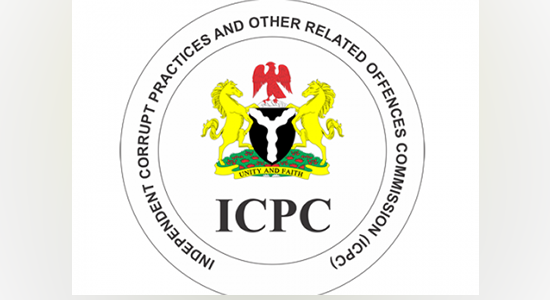 On Monday, The Independent Corrupt Practices and Other Related Offences Commission (ICPC) disclosed that it had discovered a whopping N2.67 billion meant for school feeding in federal colleges during the COVID-19 lockdown in some individual’s personal accounts. This was disclosed by The Chairman of ICPC, Prof. Bolaji Owasonye at the Presidential Villa, Abuja, during his keynote address at the 2nd National Summit on Diminishing Corruption titled: “Together Against Corruption and Launch of the National Ethics and Integrity Policy”. Owasonye said N2.5 billion was discovered in the account a senior civil servant (presently deceased) in the Ministry of Agric for himself and his accomplices.

The anti-corruption agency said other assets recovered in the Ministry of Agric include 25 plots of land, 18 buildings and12 business premises.

He said that under the Open Treasury Portal review conducted between January to August 15, 2020, out of 268 Ministries, Departments and Agencies (MDAs), 72 MDAs had cumulative infractions of N90 million.

33 MDAs provided explanations that N4.1 billion was transferred to sub-TSA, N4.2 billion disbursed to individuals had no satisfactory explanations.

The ICPC chairman also stated that in the education sector, 78 MDAs were reviewed and common cases of funds misuse were discovered.

Some of the discoveries include non-deductions/remittance of taxes and IGR; payments of unapproved allowances, payment of salary advances to staff, life payment of large sums to individuals/staff accounts; including project funds, abuse and granting of cash advances above the approved threshold and suspicious payment of allowances to principal officers.

Owasonye also said, “We have restrained or recovered by administrative or court interim and final orders assets above N3 billion, facilitated the recovery of $173,000 by the whistleblower unit of FMFB&P from an erring oil company, retrained £160,000in a UK bank in an ongoing interim forfeiture. These figures exclude quantum of recoveries on return or contractors to site as a result of project tracking initiatives.

“It should however be noted that some of these assets are subjected to ongoing cases and where suspects proved their cases physical or liquid assets will be released in accordance with laid down laws, guidelines or court directives.”

He stated that the agency’s constituency tracking project and intervention compelled 59 contractors to return to work at sites, adding that the projects abandoned were worth N2.25bn.

President Muhammadu Buhari reiterated his administration’s commitment to eradicate corruption because of its menace to our society and economy.

The President spoke at the ICPC’s 2nd National Summit and the inauguration at the National Ethics and Integrity Policy to mark Nigeria’s 60th independence and the commission’s 20th anniversary.