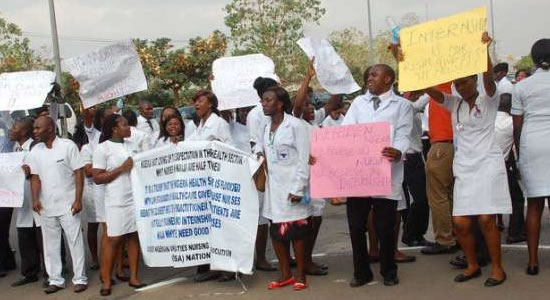 The Joint Health Sector Union (JOHESU), the Umbrella body of health workers in Nigeria has directed its members to proceed on nationwide industrial action until further notice.
JOHESU, in its statement, directed its members to withdraw their services from midnight of today, September 13, 2020. The statement titled, “Notice of 15days ultimatum/outcome of JOHESU expanded NEC meeting”. The leadership of the union had on Friday had a lengthy discussion with the federal government on their grievances of unpaid hazard allowance of the COVID-19 as promised by the federal government as well as the withheld of salaries of some of its members by some state governors.

Subsequently, after the meeting, they demanded to consult its members before reaching a way forward and had promised to get back to the federal government on 12th September.

However, today the healthcare system was greeted with industrial action, saying it was necessitated by the failure of the government to fulfill its side of obligation in meeting the union demand.

Biobelemoye Josiah, the national leader of the union said leaders of various sectors have unanimously reached consensus at the end of their expanded Exco meeting.

In his statement said “In the light of the above, the meeting of our expanded NEC was held Saturday 12 September 2020. And at the end of the meeting, which was held both physically and virtually, it was unanimously agreed that since nothing concrete was achieved at the said meeting with the Federal Government, that the strike notice is still germane and alive.

The statement further said, “Therefore, the 15-day ultimatum still subsists and with effect from midnight of Sunday, 13th September 2020 our members shall withdraw their services due to Federal Government’s inability to meet their demands,”

While addressing the Health Minister, Osagie Ehanire, in its letter, JOHESU demanded that they require a review of the COVID-19 special inducement and Hazard allowance as well as payment of the withheld salaries of its members as well as April and May salaries of the year 2018 all paid.

Aside from that, the union also demanded the review of the Consolidated Health Salary Structure, implementation of the Industrial Court judgement as well as improvement of health infrastructure across the country.

The letter dated August 26 was signed by the President and Secretary of JOHESU, Josiah, and Mathew Ajurotu respectively, president of the Nigerian Nurses and Midwives, Rauf Adeniji, and A.A. Shettima, and three other health union heads.