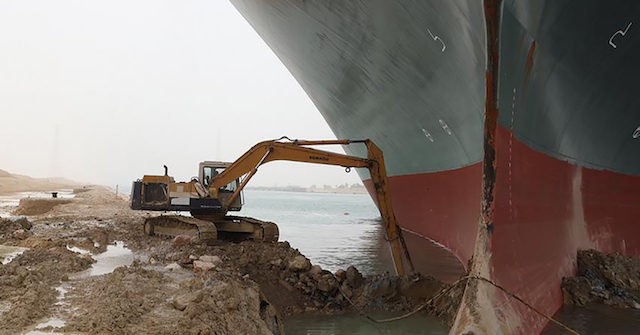 Efforts Continue To Refloat Ever Given Ship Blocking The Suez Canal

Efforts to dislodge the stricken container ship blocking the Suez canal continue as fears mount that the operation could take days or weeks. The 400-metre-long Ever Given mega-container ship ran aground on Tuesday and has blocked traffic through one of the world’s busiest shipping routes. Despite efforts to free the ship, it could take weeks to remove experts say. According to shipping data, the stranded Ever Given in the Suez Canal is said to be holding up an estimated $9.6bn (£7bn) of goods each day. This works out at $400m an hour in trade along the waterway which is a vital passageway between east and west.

Data from shipping expert Lloyd's List values the canal's westbound traffic at roughly $5.1bn a day, and eastbound daily traffic at around $4.5bn.

The canal, which separates Africa from the Middle East and Asia, is one of the busiest trade routes in the world, with about 12% of total global trade moving through it.

Its blockage is causing huge tailbacks of other ships trying to pass through the Suez Canal.

According to Giveans, vessels that are currently outside of the Red Sea that was planning to travel through the Suez Canal are contemplating whether to reroute around Africa, adding 10 to 15 days to their voyages. Ships queuing on either end of the Suez Canal area are likely to wait to ascertain how long the passage will be closed before taking a decision to divert, he said.

The fear of a longer-than-anticipated outage along the trade route threatens further turmoil in a shipping sector that’s already scrambling to keep sea transportation for everything from finished goods to energy and commodities on track.