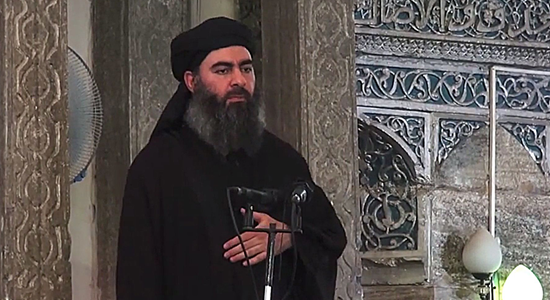 Islamic State Leader, Baghdadi May Still Be Alive - US Commander

The leader of the Islamic State (IS) group is probably still alive, a senior US general has said, contradicting a claim by Russia that it probably killed him in a raid in Syria in May. Abu Bakr al-Baghdadi may be hiding in a remote border area between Iraq and Syria, said Gen Stephen Townsend, commander of the anti-IS coalition.

He may have fled as IS strongholds have been under attack in both countries.

Baghdadi's whereabouts have been unknown for some time.

In June, Russia said there was a "high probability" that Baghdadi had been killed a month earlier in a Russian air strike on Raqqa, IS's de facto capital in northern Syria.

Since then local anti-IS groups have intensified a ground assault on the city, where an estimated 2,000 militants are holed up.

The BBC reports that there have been several previous reports of Baghdadi's death. But on Thursday, Gen Townsend said there were "indicators in intelligence channels that he's still alive".

"We're looking for him every day. I don't think he's dead," he told reporters, repeating that he had "no clue" as to where the IS leader was.

"The last stand of Isis will be in the Middle Euphrates River Valley," he added, using an alternative name for IS. "When we find him, I think we'll just try to kill him first. It's probably not worth all the trouble to try and capture him."

Baghdadi was believed to be in Mosul, Iraq, before a US-led coalition began an effort to reclaim the city in October 2016.

He has made only one public appearance in recent years - in a video delivering a sermon in Mosul on 5 July 2014, shortly after IS captured the city.

His last audio message was released on 2 November last year.