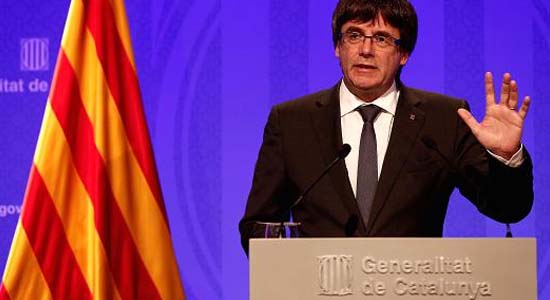 An investigating judge in Belgium has freed former Catalan leader Carles Puigdemont and four Ministers who had earlier turned themselves into Belgium Police on Sunday after an EU-wide arrest warrant was issued. The judge who released the Catalan officials said they could not leave the country without permission and would be required to give details of their accommodation.

Puigdemont and other officials had fled Spain after Spanish authority dissolved the Catalan regional government by invoking article 155 of the constitution. The move came after the region conducted a referendum and subsequently declared its independence from Spain.

The officials who fled Spain to evade arrest and prosecution have vowed not to return to Spain unless they are guaranteed fair trial. Other Catalan officials arrested by Spanish authorities are currently facing charges including rebellion, sedition, and misuse of public funds.

BBC reports that Puigdemont and the other freed officials "are now expected to appear in court in Belgium within 15 days. Belgium has a maximum of 60 days to return the five to Spain but, if they do not raise legal objections, a transfer could happen much sooner."

On Sunday, more protests in Catalan cities against the detention of officials and activists held by the Spanish authorities were observed. Protesters plastered city squares with posters depicting the detainees as political prisoners. Eight politicians are being held in an investigation into alleged rebellion and sedition linked to Catalonia's declaration of independence.