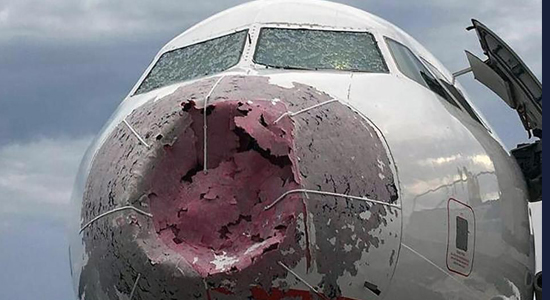 A pilot has been awarded a national medal of courage for safely landing a packed passenger jet “blind” after its windshield was smashed by giant hailstones in a violent storm over Turkey.

The Airbus A320, flown by Ukranian captain Alexander Akopov and operated by Turkish company Atlas global, was enroute from Istanbul to Erkan, Cyprus, with 127 tourists on board when it flew through the severe storms that battered the Turkish city last week.

Soon after take-off, at 1,300 metres above the ground, the aircraft’s nose was pummelled by hailstones the size of golf balls, shattering the windscreen and leaving the pilots unable to see.

Akopov, who has been awarded Ukraine’s Order for Courage, decided to turn the plane around and attempt to return to Istanbul’s Ataturk Airport.

In a video taken of the landing, employees at the airport are heard saying: “It won’t be able to land, it won’t land.” The aircraft did land safely, however, and was greeted by applause from waiting emergency services.

Another video taken inside the cabin showed passengers gripping the seats in front as the aircraft endured a bumpy approach. Other fliers can be heard screaming.

According to UK Telegraph, after landing the plane, the Captain Akopov said: “I have been flying for 30 years. Well, did you see the plane landing? Was it OK? The passengers are alive. It is normal. This is our professional reliability.”

Pilots are trained to be able to make “instrument landings” where visibility is heavily impacted and they must use instruments in the flight deck to gauge their approach, as well as transmitted radio signals from the airport.

Oleg Lungul, an engineer at Ataturk Airport, which was forced to close due to the freak storm, said on Facebook that “there was a hurricane and... hail the size of a chicken egg”, alongside photos of the A320’s damaged nose.

At least 10 people were injured elsewhere in Istanbul when the storm, which lasted just 20 minutes, on Thursday evening.