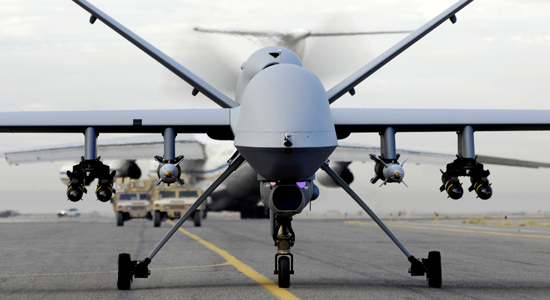 A drone carrying a grenade infiltrated an ammunition dump in Ukraine, setting off an explosion that caused an astounding billion dollars worth of damage. The incident points to the growing use of drones in wartime, particularly off the shelf civilian products harnessed to conduct sabotage and other attacks.

Ukraine's domestic intelligence service, the SBU, believes that a drone carrying a Russian thermite hand grenade caused a series of titanic explosions at Balakliya, a military base in Eastern Ukraine.

Amateur video of the incident posted on YouTube shows a raging fire spewing out of control artillery rockets, and an explosion and shockwave that sent civilians nearby reeling.

One person was killed in the attack and five were injured.

The drone is believed to have carried a ZMG-1 thermite grenade, which is a combination of iron oxide (rust) and aluminum powder. The stuff burns extremely hot and easily could have gotten through wooden crates to detonate the munitions inside.

The ammo dump is just 60 miles from the Russian/Ukrainian border, where fighting recently took place.

According to PM contributor David Hambling writing at Scout Warrior, it's not the first time military bases in Ukraine have been hit by drones. A similar attempt to blow up the Balakliya base took place in December 2015, when drones dropped 14 grenades. The fires were extinguished by Ukrainian servicemen, and one grenade, a ZMG-1, was recovered.

In October 2015, an attack on an ammunition depot at Svatovo destroyed 3,000 tons of explosives and damaged 1,700 nearby homes. Two other attacks on ammo dumps took place in February, and another facility was attacked in March.