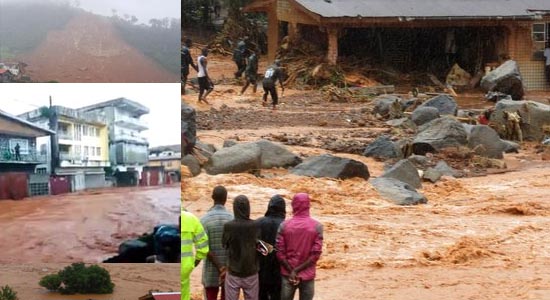 A hillside in the Regent area collapsed early on Monday following heavy rains, leaving many houses covered in mud. According to the BBC, many people may have been asleep when the mudslide occurred. Sierra Leone's Vice-President Victor Bockarie Foh said it was "likely that hundreds are lying dead". The total number of casualties is likely to rise.

Mr Foh told Reuters news agency that the disaster was "so serious that I myself feel broken".

He said that the area was being cordoned off as people were being evacuated, including many still feared trapped in their homes.

A spokesman for the Red Cross, Abubakarr Tarawallie, told the BBC that 179 bodies had been taken to the central morgue in Freetown.

Mr Tarawallie said the organisation's volunteers and staff were involved in search and rescue operations and that people affected were in immediate need of shelter and blankets.

He added that at least 100 properties had been submerged and that some had collapsed after a section of Sugar Loaf mountain came down at around 06:00 GMT.

Meanwhile, the AFP news agency is reporting that the total death toll from flooding in the capital has risen to 312, citing another Red Cross spokesperson.

Hundreds of people are likely to be left homeless following the mudslide.

A Sierra Leonean disaster management official, Candy Rogers, said that "over 2,000 people are homeless" as a result of the mudslide in the Regent area.

Mr Rogers said that a huge humanitarian effort will be required to deal with the aftermath of the flooding.

“People are wailing uncontrollably; one woman told me she had lost more than 11 members of her family in the disaster, while another man said he had lost his wife, mother-in-law and children.

“Hundreds of people are still coming to the area to look for their loved ones. Some of them told me they have not been able to find them.

“In fact, there is no sign of the dozens of homes that were built at the foot of Sugar Loaf mountain.

“They are covered in mud, with large areas of the mire in some parts. It looks strong, but it is flaky. The concern is that if people walk there they risk sinking in the mud.”

Flooding is not unusual in Sierra Leone, where unsafe housing in makeshift settlements can be swept away by heavy rains.

The rains often hit areas in and around Freetown, an overcrowded coastal city of more than one million people.