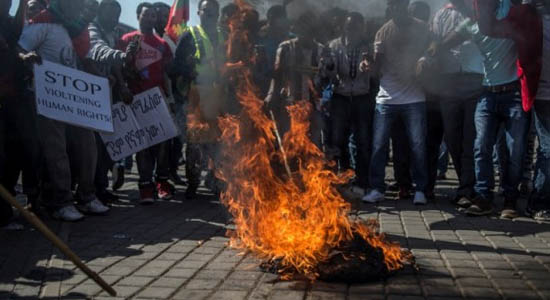 Ongoing protests rocking Ethiopia's largest ethnic region following the slaying of a popular singer, HachaluHundessa, has claimed the lives of 50 people, the violent confrontations have also led to a significant destruction of properties plus the shutting down of the country'sinternetmaking communication difficult.

Three explosions were also reported in the capital Addis Ababa on Tuesday. Several others have been injured.

The singer, HachaluHundessa, 34, belonged to the Oromo ethnic group, the country’s largest, and was shot in his car on the outskirts of Addis Ababa Monday night before dying hours later in a hospital. Police say his assailants and their motives are unknown.

The dead included protesters and members of the security forces, spokesman GetachewBalcha said. Some businesses had also been set on fire.

The Police, who have made an arrest of two persons in connection to the killing also said hundessa's burial was scheduled for Thursday in Ambo, a town west of the capital.