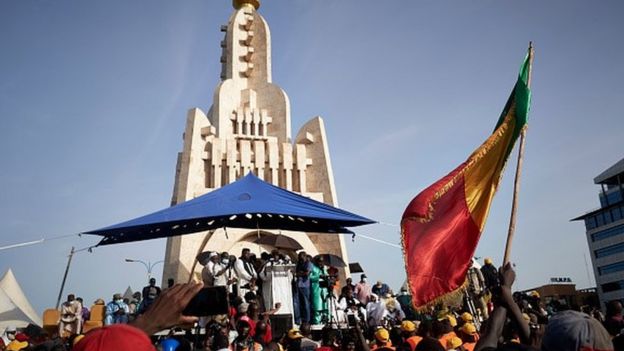 Thousands of protesters have taken to the street of Mali capital city of Bamako calling for the resignation of President Ibrahim Boubacar Keita after an alarming increase of insecurity in the country. The ongoing unrest underscored the mounting opposition to Mr Keita, who has led the West African country since 2013 when he took office months after a French-led military operation ousted Islamic extremists from power in the north.

Malians have grown weary of the government’s handling of the jihadi crisis and inter-communal violence, opposition parties and clerics have also accused the Keita government of corruption. Demonstrators also have denounced his government’s response to the March kidnapping of the opposition leader Soumaila Cisse. Mr Cisse, whom Mr Keita defeated in the 2013 and 2018 presidential votes, was campaigning for his party before a legislative election when he was abducted in an area controlled by extremist groups linked to Al Qaeda.

On Friday, protesters led by conservative imam Mahmoud Dicko, a coalition of opposition also criticized the April legislative election and called for the National Assembly and constitutional court to be dissolved. They put up roadblocks to prevent police from advancing after security forces started firing tear gas to disperse the crowds in Bamako’s Independence Square.

President Keita, who is due to step down in 2023, became president the year after Mali’s president of a decade was overthrown in a coup, creating a power vacuum that allowed the Islamic insurgency to take hold. Seven years after the French-led military intervention, insurgents linked to Al Qaeda and the Islamic State group continue to launch frequent attacks.

The president has however pledged to form a new government with opposition members. But despite negotiations between the two sides earlier this week, the protest has gone on as planned.