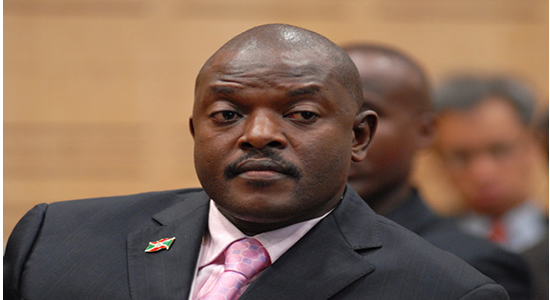 Outgoing President of Burundi Pierre Nkurunziza, 55 years old has passed on at a hospital in Karuzi, eastern Burundi. In a statement posted on Twitter on Tuesday Nkurunziza, had attended a volleyball match on Saturday afternoon and was taken to the hospital that evening after falling ill. His condition improved and he was said to have spoken to some around him but on Monday,his condition suddenly deteriorated leading to cardiac arrest. All efforts by doctors to revive him proved unsuccessful.

The government has declared seven days national mourning period in his honour. The nation's national flag would be flown at half-mast.

President MuhammaduBuhari in a statement signed by the Senior Special Assistant to the President on Media and Publicity, Garba Shehu, hasexpressed his condolence describing late Nkurunziza as a true patriot who steered his country through turbulent times with wisdom and foresight.

"It is with profound grief and sadness that we received the news of the death of President Pierre Nkurunziza,"Buhari said.

“Our thoughts and prayers also go out to the family of the President. May God grant them the fortitude to bear the loss," he added.

After 15 years in power, MrNkurunziza was due to step down in August.