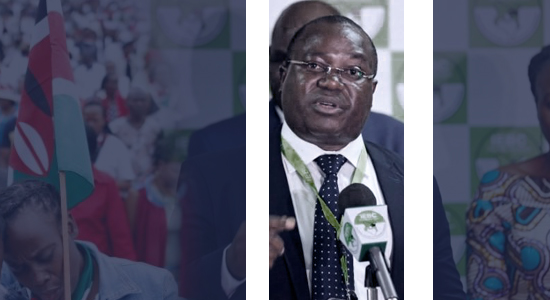 An official in charge of overseeing Kenya's electronic voting system has been found dead just days before the August 8 presidential election, according to the commission's chairman.

The body of Chris Msando, a top information technology manager at the Independent Electoral and Boundaries Commission (IEBC), has been identified at the city morgue, Wafula Chebukati, IEBC chairperson, said on Monday.

"There was no doubt he was tortured and murdered. The only question in our mind is who [killed him] and why he was killed a few days to elections," Chebukati told reporters.

Msando was declared missing over the weekend.

In an earlier statement, Chebukati said Msando was last seen on Friday night and sent a text message to a colleague early on Saturday morning suggesting "that he was conscious and fully aware of his itinerary for that day".

A mortuary employee said Msando's body was brought in by police on Saturday alongside that of a woman.

Both were naked and appeared to have been tortured before their bodies were dumped in a forest in Kiambu outside Nairobi.

It was unclear why it took 48 hours for the body to be identified.

Msando was in charge of a system of electronic voter identification and vote counting seen as crucial to avoid rigging, and was the second in command in the commission's IT department.

A source close to the IEBC told AFP news agency that Msando had helped seal loopholes that could be used to manipulate vote tallies.

Msando's death should be "urgently" investigated, Human Rights Watch said in a statement.

"Msando's killing comes as the electoral management body was due to audit its systems, a week away from the election day," said the group's Africa researcher Otsieno Namwaya.

Chebukati announced the cancellation of that audit after Msando's killing.

Al Jazeera's Catherine Soi, reporting from Nairobi, said the death adds to the doubt cast on the upcoming election.

"This is just adding more doubt and more tension to the situation in the country ahead of the election. People want to know why he was killed, who would benefit most from his death and they want a very speedy investigation," she said.

"And whatever happens, they want a credible and fair election."

Msando's death follows a mysterious attack at the home of deputy president William Ruto on Saturday in Eldoret northwest of Nairobi.

Police say a lone assailant killed one police officer, wounded another, then held off security forces for nearly 24 hours before being killed.

The race for the presidential polls between President Uhuru Kenyatta and longtime opposition leader Raila Odinga has been bad-tempered and tight.

Both sides have accused the other of underhanded tactics in the run-up to the polls, with the president saying Odinga is trying to divide the nation and provoke violence, and the opposition leader claiming Kenyatta plans to rig the poll.

Odinga's opposition alliance NASA condemned the "heinous murder" of Msando, saying in a statement they were "gravely concerned" about its implications.

"That no effort was made to camouflage this killing as an accident shows the determination of the killers to send a chilling message that they will stop at nothing to ensure the outcome they desire," read the statement.