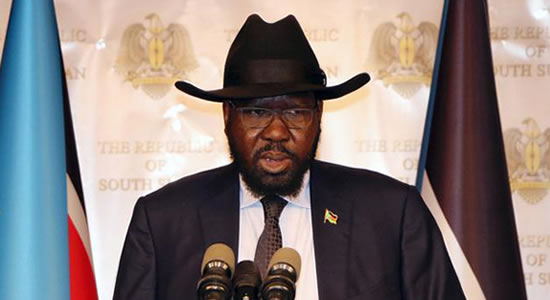 The South Sudan President Salva Kiir has today Friday made a u-turn as he accepted to set up a power-sharing government, to honour a peace deal and also pledge for a unified Army.

Kiir and rebel chief Riek Machar, whose fallout in 2013 sparked a conflict that consumed hundreds of thousands of their countrymen dead, the duo were granted an extension of 100 days to form a power-sharing government on Thursday, in the latest modification to the truce they signed in September 2018.

Salva Kiir while addressing his countrymen, has called on both parties to exercise restraint, he noted that the 100 days deal is endurable if it will guarantee the peace in Southern Sudan.

Part of the deal is that fighters from both sides would be called upon into a military camp to be trained as an 83,000 block- unified Army the deal which has been delayed by paucity of fund.

In his statement, he said he is assuring them that the remaining part of the $100 million the government pledge will be raised in due course.

According to him, he called on his Army and the opposition forces to maintain peace.

Kiir and Machar were granted the extension after a rare face-to-face meeting held with regional heavyweights in Uganda.

Some regional leaders brokered peace between the duo at Entebbe to find solution to the lingering crises, the duo has agreed to join forces in a coalition government by November 12, and however, despite most key issues bordering on it appeared gloomy.

The foot dragging had attracted a sharp warning from the United State who is the Major backer of the state.

A top US Diplomat of Africa said Kiir and Machar body language has casted doubt on their sincerity and suitability to continue to lead the Nation peace process.

The Diplomat wrote on his tweeter, “The US is considering all possible options to put pressure on those individuals who would impede peace and promote conflict.