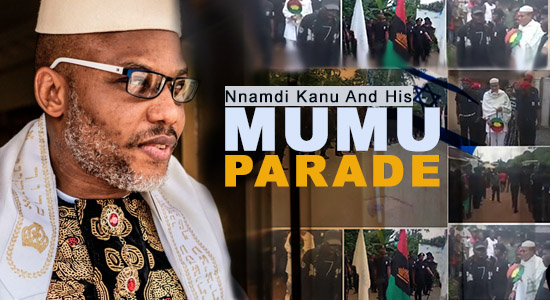 I watched with utter disgust a recent video where Nnamdi Kanu was seen gallivanting while inspecting a parade and guard of honour mounted by the 'Biafra Security Service (BSS)' in Abia State. What a shame!  While reactions have continued to trail the ambiguous show of charlatanry and utter exploitation of Ndigbo by the masquerade called Nnamdi Okwu Kanu, the facts remain that Kanu is a pseudo criminal perpetuating his ideals for personal gains.

The whole show of shame completely shatters possible silver lining in the rejuvenated Biafran dream amongst Ndigbo sons and daughters around the world. Kanu’s desperation for relevance has taken him overboard in a display of sheer ignorance, lack of coordination and application in his chauvinistic agenda.

The video was supposed to be a propaganda aimed at projecting the readiness of Kanu and his IPOB agitators to enforce the Biafra dream, by applying force where necessary. The BSS is supposed to be the vital component of the Biafran Armed Forces, with the mandate to muster military options in enforcing the realization of Biafra.

However, what we saw was indeed an eyesore, an insult on the intelligence and versatility of Ndigbo. It dashed the hope of anyone who thinks Kanu may have genuine intentions and organized plans afterall.
First, members of the BSS looked hungry, unaware, and are largely illiterate who were apparently detached from the show of shame even though they were the objects of manipulation. The BSS Parade Commander hardly made a coherent statement. He tried to rehearse a script while making disjointed parade commands. Even when Nnamdi Kanu inspected the parade, it was another shenanigan for the camera.

My thoughts are clear and simple. Kanu will continue to pursue his acts of deception against the sensibilities of Ndigbo, as long as those WHO MUST speak continue to maintain a cold silence or total indifference. I know without equivocation that we the Ndigbo remain the target of Kanu's exploitation. He knows our passion for self-actualization, so he will continue to exploit his caricature campaigns at the detriment of our collective will.

No wonder members of the BSS lack any form of originality. They played parade songs of the Nigerian military, while the acclaimed leader of Biafra movement inspected the parade. They even sang an Hausa song (....wayo wayo wayo,......wayoyo....) commonly sang by members of the Nigeria military and para-military outfits during training and road walks. Even the “general salute” which Kanu acknowledged and the accompanying trumpet sounds is copycat of the Nigerian Army.

It is therefore obvious to all who can see that Kanu has nothing different to offer. He wants to lead the Ndigbo by faith or by force. With his BSS, he is only primed to take his thuggery to Anambra State where he has vowed to disrupt the forthcoming gubernatorial election in the State. We must rise and resist this sham and refuse to be cowed by Kanu and his group of Social Media Warriors.

Frank Eze
Email: This email address is being protected from spambots. You need JavaScript enabled to view it.
Twitter: @realfrankeze