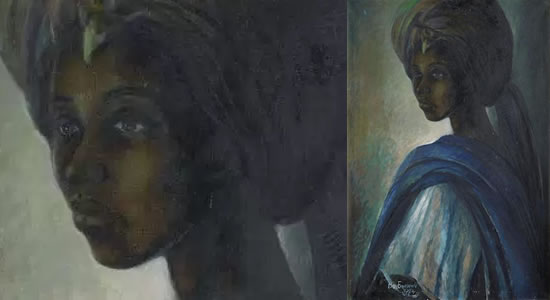 The incredible painting of Ile-Ife princess by Ben Enwonwu, Adetutu Ademiluyi, known as Tutu, gets an auction of £1, 205,000, four times more than expected. The Nigerian masterpiece, initially declared missing was found in a “modest north London flat” recently.
In naira terms, it was sold for N508, 358, 301, an African record. The painting, ranked by arts collectors with Mona Lisa, was done by Nigeria’s renowned artist late Ben Enwonwu in 1974.

Bonhams, the auction company announced the record price for the paint, which measures 97 x 66.5cm and was signed by Enwonwu and dated 1974. The identity of the buyer of the Lot 47 has not been disclosed yet. There were other Enwonwu’s paints sold today, but none fetched anything near Tutu.

The other Nigerian artist whose work was also of great reckoning during the auction was Yusuf Adebayo Cameron Grillo. His ‘Evangelists: Cymbal, Triangle and Tambourine’ done in 1964, was sold for £56,250.

Bonhams says on its website that Ben Enwonwu’s portraits of Tutu have achieved a high level of celebrity because the paintings were some of the most enigmatic works produced by a Nigerian artist in the 20th century.

“The violence of the Nigerian/Biafran conflict (1967-1970) was still fresh in public consciousness, and academic institutions were tasked with promoting a spirit of national reconciliation. Enwonwu embraced this duty, using Negritude ideology and imagery to explore issues of cultural identity and political contestation that the Nigerian civil war had laid bare. The artist created a number of his most famous works during this period, including three portraits – all titled Tutu – of a young Yoruba woman named Adetutu Ademiluyi, a granddaughter of a previous Ooni (king) of Ife.

“Enwonwu frequently made trips to the countryside surrounding Ife, sketching the landscape and recording cultural traditions and practices. It was during one of these visits that he encountered Tutu. He was so impressed by her beauty and unusual features that he asked her parents for permission to paint her. Enwonwu may have also been motivated by her status as a royal princess of Ife – he was also of royal lineage, descended from the Umuezearoli of Onitsha. In addition, winning the approval of the Ife royal house would offer the artist protection from any problems arising from his Igbo ethnicity, a contentious issue in post-war Nigeria.”