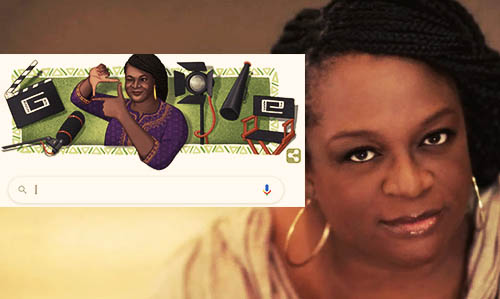 The doodle, which was illustrated by the Nigerian-American artist Oruwari data, the prize-winning writer, director and producer celebrates Amaka Igwe on her 57th posthumous birthday.

The Nigerian filmmaker and broadcasting executive popularly known for the production of ‘Fuji House of Commotion”, was the owner of Top Radio 90.9 Lagos and Amaka Igwe Studios.

She was recognised as one of the second-generation filmmakers who had helped transform the Nigerian film industry and built a media empire from the ground up with her works in films such as ’Rattlesnake“(1995),” violated“(1995) and” The wisdom of a hairdresser”(2001 for Mnet), which at the time helped to establish a higher production standard for Nollywood.

Uzoamaka Audrey Igwe was born on this day in 1963 in Port Harcourt, Rivers State. She remained a prominent figure in the industry until her death in 2014.

A Google Doodle is a special, temporary alteration of the logo on Google’s homepages intended to commemorate holidays, events, achievements and notable historical figures.